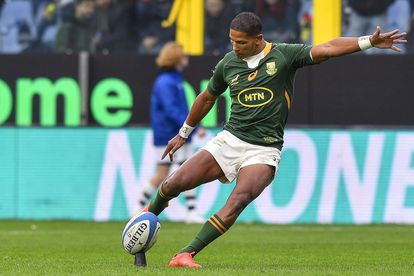 Manie Libbok kicks at goal for the Springboks. Photo by Luca Sighinolfi/INPHO/Shutterstock/BackpagePix

Manie Libbok kicks at goal for the Springboks. Photo by Luca Sighinolfi/INPHO/Shutterstock/BackpagePix

Springboks coach Jacques Nienaber has made eight changes and one positional switch to his matchday squad to face England at Twickenham on Saturday in the final Outgoing Tour clash.

Nienaber’s made six changes to his starting team with Jesse Kriel (centre), Makazole Mapimpi (wing), Evan Roos (No 8) and Eben Etzebeth (lock) back in the mix, while Damian de Allende moves from outside centre to inside centre where he partners up with Kriel, and Kurt-Lee Arendse will start at right wing after playing on the left in Genoa.

Once again Manie Libbok will play off the bench, with the Stormers star having won many plaudits after producing a scintillating 35-minute cameo against Italy last weekend after coming on when Cheslin Kolbe got injured.

Springbok fans will be hoping he can replicate his creative touches against England this weekend, and there is a good chance that he will receive an extended run in the second half.

However, coach Jacques Nienaber admitted there wasn’t an overwhelming to hand Libbok his first Test start just yet.

“Manie is going from strength-to-strength in the squad. He has been with us for about eight weeks, and you can see how he has taken more ownership in terms of the rugby stuff – on the field and off it. We are really excited to see what he can do at Twickenham.

“The games are getting bigger and bigger, and there will be more pressure … It will be similar to what we experienced in Marseille (against France). It is good for his development, and it is nice to have him with us.

“Were we tempted (to start Libbok)? I think Damian is doing well, and he is driving the team forward. He only started after about five Test matches this year to settle in at 10. He is getting lekker experience playing at 10. We know he can do it for us at 12 and at 15. It is nice to have the two of them.”