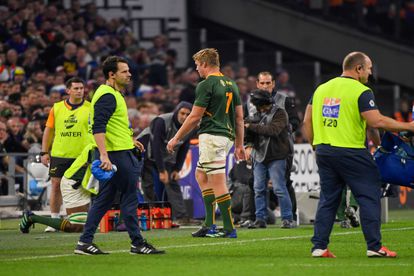 Pieter-Steph du Toit’s availability for selection in the Test against Italy will be determined at a hearing on Tuesday and Springboks assistant coach Deon Davids says the team will accept outcome.

Du Toit was the recipient of a red card in the 11th minute of South Africa’s Test against France in Marseille, after he recklessly lunged into a ruck and hit Jonathan Danty square in the head, leaving the French centre sprawled on the ground while play continued.

Replays did show that Du Toit’s plunge was significantly aggravated by a shove in the back from his Springboks teammate Kwagga Smith. But it made Du Toit’s action no less dangerous.

Du Toit will appear before World Rugby’s disciplinary committee on Tuesday and according to Sport24‘s Khanyiso Tshwaku who is on tour with the team, Davids confirmed on Monday that the Springboks are planning this week’s team selection around said hearing and the subsequent outcome.

“Pieter-Steph’s hearing is on Tuesday and if we get an answer soon, we’ll plan according to that,” Davids said.

“There are processes that are followed when a player is yellow-carded or red-carded and for Pieter-Steph’s case, the same process will be followed.

“We feel sorry for Pieter-Steph that he got a red card in that clash. The PSDT I know does everything within the rules and doesn’t try to play outside of them.”

Davids added that the Springboks would not appeal any sanction — which is usually a ban — handed down to Du Toit.

“We’ll make plans around that, and we’ll be happy to have him in the camp. We’ll accept the outcome of the hearing.”

Davids explained that the early loss of Du Toit in the game against the French, disrupted the team’s flow, but that the players should be commended for the effort they put in.

“We got a bit disjointed when we lost Pieter-Steph early, but I must commend the players on how they reacted towards that,” Davids said.

“We put ourselves under pressure at the start, but we recovered well in terms of the rewards and the execution from the lineouts and the scrums.

“The guys did well under those circumstances.”

The Springboks Test team to take on Italy will be announced at 3pm (South African time) on Tuesday afternoon.

Meanwhile, South Africa ‘A’ head coach Mzwandile Stick made five changes to his starting team to face the Bristol Bears at Ashton Gate Stadium on Thursday.

ALSO READ: Plenty of surprises in South Africa ‘A’ team for Bristol clash