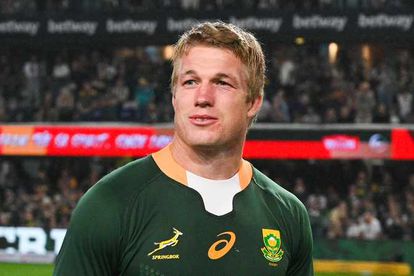 Flank Pieter-Steph du Toit will miss the two final Springboks Tests of the season, against Italy and England, after receiving a two-match suspension for a head-clash incident that resulted in his sending-off against France.

Du Toit was shown a red card after a sickening collision with Jonathan Danty when he tried to clean out a ruck in the 11th of the Test between the Springboks and France in Marseille. The Springboks went on to lose the game 30-26.

The 30-year-old appeared before World Rugby’s judicial committee earlier this week after his automatic citing following the red card and the outcome was made public on Thursday afternoon.

Du Toit has handed a three-match suspension, which will be reduced to two if he completes a Coaching Intervention Programme. As a result, he is not eligible for selection in the Springboks’ upcoming Tests against Italy and England.

Watch the head-on clash between Du Toit and Danty here:

Meanwhile, the Springboks have named their side for the match against Italy in Genoa, which kicks off at 3pm on Saturday afternoon. Franco Mostert has replaced Du Toit in the No 7 jersey in the starting lineup.