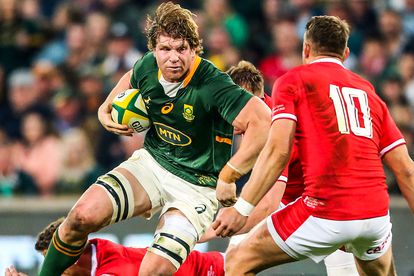 Evan Roos will start at No 8 for the Springboks. Photo: SA Rugby website

Evan Roos will start at No 8 for the Springboks. Photo: SA Rugby website

On Tuesday, Springboks coach Jacques Nienaber announced that he had made eight changes and one positional switch to the matchday squad to face England at Twickenham on Saturday, with a handful of South Africa ‘A’ players and Canan Moodie – who joined the team this week – getting a run. Kick-off is at 19:30 (SA time).

Perhaps the most notable selection is that of Evan Roos at No 8, with many having thought that Kwagga Smith was most likely to shift to the eighthman spot. However, the former Blitzboks star will remain in an impact role off the bench.

“We are very excited to see what this group of players will do against a quality England side given the mix of talented young players who have been putting up their hands and the experienced guys who have come a long way with us over the last few years,” Nienaber commented.

“As with all competitions we can only select a limited number of players, so we have had to be creative with balancing building player combinations and giving the young players a chance to show us what they can do at top Test level and this game gives us a golden opportunity to do so.

“It doesn’t get bigger than playing against England at a packed Twickenham in the last Test of the season for a player, and one can sense the excitement among the players about this occasion.”

Although the Springboks squad is somewhat depleted due to the fact that six overseas-based players left the group this past weekend, Nienaber said there was still confidence in the quality of the team named on Tuesday.

“With this Test falling outside the international Test window, we knew we would have to make changes to the team, but we are pleased with the depth we have built in the wider squad in the last few months, and it is paying off for us this week,” said Nienaber.

“Every player in this squad has played Test rugby, and most of them have received game time at this level thanks our selection plan throughout the season and the SA ‘A’ games against Munster and Bristol.”