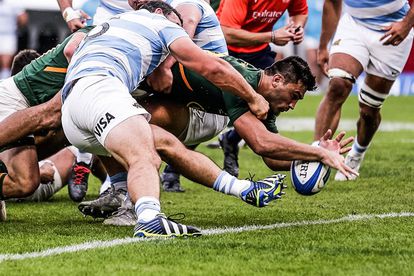 There will be joy, but ultimately heartbreak for the Springboks and their fans this weekend, if bookmakers are to believed. Photo: SA Rugby website

There will be joy, but ultimately heartbreak for the Springboks and their fans this weekend, if bookmakers are to believed. Photo: SA Rugby website

There will be joy, but ultimately heartbreak for the Springboks and their fans this weekend, if bookmakers are to believed.

In terms of handicap, the Springboks are 17.5-point favourites.

However, while it’s likely the Springboks will pick up a full-house of five log points should they run out winners – as predicted – it’s likely to leave Jacques Nienaber’s men agonisingly short of the All Blacks in the final standings.

In the day’s earlier Rugby Championship clash at Eden Park in Auckland (09:05 SA time), New Zealand have been installed as 1/10 favourites with Australia available at 11/2.

The All Blacks are 15.5-point handicap favourites suggesting they too will pick up a bonus-point victory.

New Zealand head into the final round of fixtures atop the standings with a superior points differential of +13 over the Springboks.

Springboks have won the Rugby Championship once

Should the All Blacks and Springboks win by the predicted margins above, it won’t be enough to see the latter walk away with the title.

However, in the Springboks’ favour of course will be the fact they will know exactly what they need to do come the 17:05 kick-off to be crowned champions.

This year is the 10th edition of the Rugby Championship since Argentina joined the fray putting an end to the Tri-Nations as the tournament was previously known.

In the nine tournaments to date, the All Blacks have lifted the trophy on seven occasions with the Wallabies (2015) and Springboks (2019) tasting success once each.

Interestingly, the only times the All Blacks have failed to win the Rugby Championship has been in Rugby World Cup years when the tournament is reduced to a single round of matches.

NOTE: South Africa did not compete in the 2020 ‘Rugby Championship’ due to Covid-19 travel restrictions.