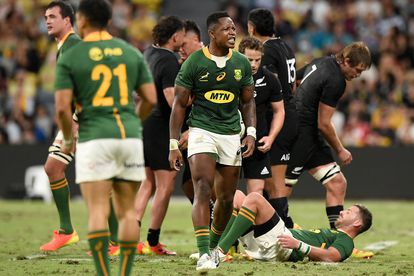 Rugby Championship organisers have ordered New Zealand, South Africa, Argentina and Australia’s players and staff to isolate in their hotels due to a Covid-19 outbreak in Brisbane. Photo: Twitter @Springboks

Rugby Championship organisers have ordered New Zealand, South Africa, Argentina and Australia’s players and staff to isolate in their hotels due to a Covid-19 outbreak in Brisbane. Photo: Twitter @Springboks

All Blacks defence coach Scott McLeod has confirmed that Rugby Championship organisers have ordered New Zealand, the Springboks, Argentina and hosts Australia’s players and staff to isolate in their hotels due to a Covid-19 outbreak in Brisbane.

READ | ALL BLACKS PROP EXPLAINS HOW SPRINGBOKS CHEAT AT SCRUM-TIME!

According to the Planet Rugby website, McLeod said all four teams are allowed to have closed training sessions outside their hotels but are not allowed to mix with the public.

“We’re not allowed out of the hotel except for essentials or medical visits,” he told Reuters in a video call from the team’s Gold Coast hotel.

“It’s something that’s unexpected but we’ve had it before and dealt with it really quickly.”

Brisbane is the capital city of the state of Queensland which reported four new Covid-19 cases on Tuesday. That includes a first case in nearly eight weeks where it is unclear where the source of the infection is.

Last weekend, the four Rugby Championship nations played in a double-header in Townsville and the tournament is set to reach its conclusion this Saturday on the Gold Coast.

The Wallabies are due to play Argentina at 09:05 (SA time) followed by the All Blacks against the Springboks in their 101st all-time Test at 12:05 (SA time).

The All Blacks have already clinched the Rugby Championship title while Australia will finish second if they beat Argentina – or if both they and the Springboks lose.