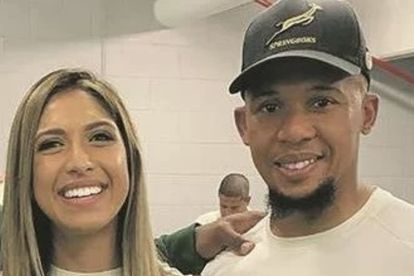 There has been a naturally widespread and dramatic reaction to the news that Springboks flyhalf Elton Jantjies and team dietician Zeenat Simjee had been sent home from Argentina following reports of an alleged affair.

Despite Jantjies and Simjee being sent back to South Africa, SA Rugby president Mark Alexander subsequently stated that they still needed to accurately gather all the facts before deciding whether further action would be taken, while he also questioned the anonymous sources who disclosed the information to Rapport.

“We have very strict team rules and the management team will deal with the issue,” Alexander said. “I don’t want to dig into anyone’s personal life because all the information is hearsay right now. It’s still just gossip.

“If people are so serious about what happened, they should go on the record about what they know,” added Alexander.

Dramatically, in a statement released on Friday by Simjee, she appealed to Rapport – who broke the story – to “retract and apologise” for the reports that were “devoid of truth”.

Read the full statement below

I am the subject of some extremely negative media reports over the last week, tarnishing me personally and degrading my dignity.

I chose to maintain a dignified silence while the media storm was raging, as I am severely traumatised by what has transpired.

Let me unequivocally state that I am shocked at the level of sensational journalism from the newspaper that first published the article. I am devastated by the fact that a journalist and his newspaper could publish such damaging allegations on false and baseless hearsay. It is disappointing.

As a young professional, I hold my profession in high regard. In the same light, it is an honour and privilege to represent my country and be part of the Springbok Team. As a person of values, I will not bring about disrepute to myself, my family, my profession and all the many incredible people that have been kind, positive and supportive towards me throughout this ordeal.

The weekend ahead of the test week in Mbombela, I had been with my parents dealing with family bereavement. So, the allegations of me spending time with Elton Jantjies at a guesthouse is devoid of any truth.

This has cast an extremely negative aspersion and disgraceful perspective on my character to which other media houses have also added their perspective. I appeal to the original publisher to retract and apologise for the negative sentiment cast on me.

Jantjies’ wife Iva, who is currently in Japan, spoke to Netwerk24 on Tuesday about the allegations and suggested it had all come as a terrible shock.

“I was shocked, I’m still shocked, I thought she was a family friend,” Jantjies’ wife commented. “Elton denies everything … I have my reservations, but all we can do now is wait and see.”

The Springboks are currently preparing for a Rugby Championship clash against Argentina, but during press conferences this week a ban has been placed on any Jantjies-related questioning,

A host of comments and social media backlash has naturally followed the story, with former Springbok Rob Louw posting an insensitive comment to Twitter which read: “I don’t understand the Springboks selectors now that Elton scores he gets sent home,” with the post followed by a laughing emoji.

South Africa’s director of rugby Rassie Erasmus, who was tagged in the post, responded emphatically.

“Rob you tagged me, so I guess you want a response. I have obviously been guilty of making comments/fun of stuff like this in the past! When I see the suffering & damage to innocent children & parents involved I tend to think twice before I comment (just respect for the families).”

According to the original article in Sunday newspaper Rapport, Jantjies and Simjee were involved in an alleged tryst at a bed and breakfast in the week leading up to the Test against the All Blacks in Nelspruit in August.

It’s cast a considerable shadow over any possible return to the Springboks for Jantjies, with plenty of reaction on social media suggesting that the 32-year-old should not return to the team after this latest indiscretion.

Late on Sunday night, Jantjies made an interesting social media post on Instagram, sharing an image to his story that states: “I prefer to distance myself whenever I’m mad to calm my mind otherwise I become the most heartless person you’ll ever meet.”

Jantjies has over 110 000 followers on Instagram, with his bio reading as follows: “Sportsman of Loyalty, Respect and Honour”.

This latest shocking story came just months after Jantjies was detained at OR Tambo International Airport for a widely-publicised incident on board a flight back to South Africa.

At the time, the Springboks stated that Jantjies had to be viewed as “innocent until proven guilty”, but it was never a good look as he remained part of the squad.

On Sunday, the Springboks released a statement in relation to the most recent report, but suggested that ‘no team protocols had been breached’.

“The Springbok management are aware of reports regarding Springbok flyhalf Elton Jantjies and team dietician Zeenat Simjee between the training camp in Sabie and the Test match against New Zealand in Mbombela earlier this year.

“No team protocols were breached, but the individuals are returning to South Africa to attend to these personal reports and to eliminate any distractions to the team’s preparations for the Test against Argentina. No further comment will be made at this time.”