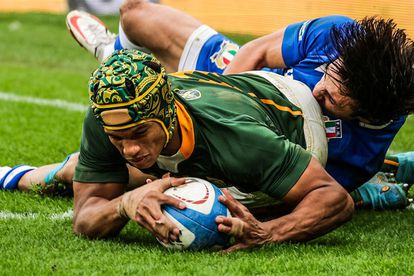 The Springboks stayed fourth in the World Rugby rankings despite their thumping win over Italy in Genoa on Saturday. Photo: SA Rugby website

The Springboks stayed fourth in the World Rugby rankings despite their thumping win over Italy in Genoa on Saturday. Photo: SA Rugby website

The Springboks recently produced what was undoubtedly their best attacking performance of the year as they ran in nine tries, the majority coming in the second half, as they thrashed Italy 63-21 last weekend.

It looked as if some of the Springboks’ attacking ambitions finally came fully to fruition, while they had also displayed clear intent to run the ball back at France in their second end-of-year Test as well.

Despite these encouraging signs to suggest that South African can play ‘another way’, there has been frequent criticism of their attacking synergy for most of this year, with many fans even calling for a specialist attack coach to join the team.

ALSO READ | ETZEBETH SET FOR ANOTHER BIG MILESTONE ON SATURDAY!

At a press conference on Tuesday, Jacques Nienaber was asked about whether his team received all the respect they deserved when it came to their capabilities on attack, and the coach provided a detailed and emphatic response.

“People form their own opinion on your style of play. If you think of the [2019] World Cup final, who scored our tries? Look at Kurt-Lee Arendse. He has scored against France and Italy. He has played six Tests and scored six tries.

“Those are the on-field facts that we know. But again, we can’t control the narrative that gets put out there, that we are boring, that we don’t attack, that we just kick and tackle. We can’t control that and all the energy we put into that, you won’t change that narrative. That’s what people want to drive.

“As long as you are truthful – on and off the field – with the facts available, you have shared it with the players and the players know what the truth is, that’s all we can do.

“I don’t know if we will ever get respect, but as long as we are comfortable with what we are putting out there and trying to achieve and we are open and honest with each other, we are happy.”

The Springboks will finish their tour with a Test against England at Twickenham on Saturday, with this result sure to go a long way to determining whether the 2022 season could actually be deemed a success.