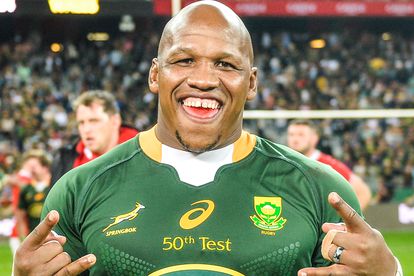 Springbok hooker Bongi Mbonambi joined the squad in Buenos Aires after completing the initial stages of his recovery from the knee injury. Photo: Ashley Vlotman/Gallo Images

Springbok hooker Bongi Mbonambi joined the squad in Buenos Aires after completing the initial stages of his recovery from the knee injury. Photo: Ashley Vlotman/Gallo Images

Springbok hooker Bongi Mbonambi joined the national squad in Buenos Aires on Monday after completing the initial stages of his recovery from the knee injury that sidelined him before the second Rugby Championship Test against New Zealand in Johannesburg last month.

ALSO READ | LET THE DEBATE BEGIN: WILL PIETER-STEPH BE BACK FOR THE SPRINGBOKS?

Mbonambi returned to the Sharks following the injury and will be assessed by the Springbok medical team this week to as the squad prepare for their penultimate match of the competition against Argentina on Saturday.

He joins Malcolm Marx, Joseph Dweba and Deon Fourie as the hookers in the squad.

Springbok coach Jacques Nienaber said Bongi Mbonambi’s recovery would be assessed this week with an eye on possibly getting him ready for contention for selection for the team’s closing Rugby Championship Test against Los Pumas in Durban on Saturday, 24 September.

Springboks will name their team on Tuesday

“It’s great to have Bongi back in the set-up and this week will be a fantastic opportunity to re-integrate him into our systems and for our medical team to assess his recovery,” said Nienaber.

“He is a key player in our structures, and he also has a strong presence off the field, so it is pleasing to welcome him back.

“Bongi was expected to begin training this week, so it made sense to recall him to the squad, so that our medical team can work closely with him to ensure that we can get him back on the field as soon as possible.”

Nienaber will announce his team to face Argentina this weekend on Tuesday.