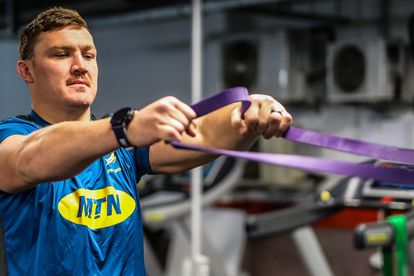 The Springboks will begin against Wales a 16-match countdown before defending their Rugby World Cup title in France next September. Photo: SA Rugby website

The Springboks will begin against Wales a 16-match countdown before defending their Rugby World Cup title in France next September. Photo: SA Rugby website

The Springboks will begin on Saturday against Wales in Pretoria a 16-match countdown before defending their Rugby World Cup title in France next September.

The Springboks play Wales, New Zealand, Australia and Argentina three times each and Ireland, France, Italy and England once, and there is the possibility of two warm-up matches next year.

Tests on consecutive Saturdays against Wales in Pretoria, Bloemfontein and Cape Town will get the ball rolling, to be followed in August and September by three home and three away Rugby Championship matches.

A format change means the Springboks will face their greatest rivals, New Zealand, twice in South Africa, before tackling Australia twice away.

Only the matches against Argentina follow the traditional southern hemisphere championship pattern of home and away fixtures.

In November, a daunting tour sees the world champions confronting Ireland, France and England within four weekends. A visit to Italy completes the schedule.

READ | SPRINGBOKS COULD SLIP TO THIRD IN THE RANKINGS: HERE’S HOW!

The 2023 Rugby Championship will be reduced from six rounds to three because of the World Cup and there have been unconfirmed reports of South Africa playing two other Tests.

South Africa are grouped with Ireland, Scotland, Romania and an Asia/Pacific qualifier in France and the pool winners and runners-up advance to the quarter-finals.

A series win over the British & Irish Lions in Cape Town and a last-gasp victory over New Zealand in the Australian Gold Coast were the highlights.

The low point for World Cup-winning skipper Siya Kolisi and his green and gold team-mates was suffering a 13-point loss by Australia in Brisbane.

Wales were humiliated by Italy in their last Test

While the No 1-ranked Springboks were highly competitive in 12 of 13 Tests, Wales have plummeted to ninth place after only four victories in the last 12 matches under New Zealand-born coach Wayne Pivac.

The most humiliating defeat was at home to perennial strugglers Italy four months ago in a Six Nations championship where Wales won just once in five outings.

Add to that sorry tale the fact that Wales have lost all 10 Tests in South Africa, including a 96-13 thrashing in Pretoria 24 years ago, and the odds seem to be stacked against them this month.

Loftus Versfeld, where the first Test takes place, has been a particularly unhappy venue for the Welsh as they conceded 186 points in three Tests there – a match average of 62.

But despite the seeming imbalance, Springboks coach Jacques Nienaber is stressing caution and Pivac is hopeful on the eve of the first international.

“I believe it will be a tightly contested series,” said Nienaber.

“Wales are in the same desperate state that we were four years ago.

“We were the laughing stock of rugby at the beginning of 2018 and less than two years later we were world champions.

“I know what it feels like to be down and Wales will want to copy us and soar. When I met Wayne (Pivac) some time ago he told me they were desperate for a series win in South Africa.”

Pivac said: “I think everybody knows what we are coming into, we know Wales have lost all 10 Tests in South Africa, but we believe we can succeed here.

“It is a massive challenge tackling the world champions in their backyard with two of the Tests at altitude. It is going to be a good test for us and will show us exactly where we stand.”

As reported by The South African website, the tourists will wear black armbands in memory of legendary Wales flyhalf Phil Bennett, who died last month aged 73.

READ | ALL BLACKS PROP EXPLAINS HOW SPRINGBOKS CHEAT AT SCRUM-TIME!