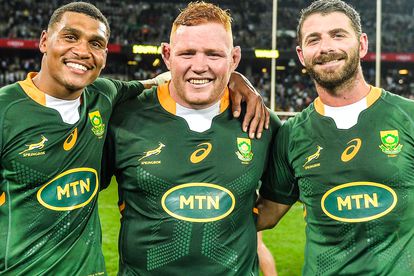 The Springboks’ selection on the right wing will be the biggest talking point when the team is announced for Saturday’s All Blacks Test. Photo: Ashley Vlotman/Gallo Images

The Springboks’ selection on the right wing will be the biggest talking point when the team is announced for Saturday’s All Blacks Test. Photo: Ashley Vlotman/Gallo Images

The countdown to the 2023 Rugby World Cup in France is heating up and so is competition for these FIVE key positions in the Springbok starting line-up.

One of the stand-out features of the Boks 2022 has been new stars rising and opportunities being given.

Damian Willemse has really put his hand up to shake up selection at the back while some rare starts have been given to the likes of Jaden Hendrikse and Malcolm Marx – who have really stood out!

READ: RASSIE ERASMUS REVEALS THE MAN IN CHARGE OF THE SPRINGBOKS ATTACK

This year we have seen Trevor Nyakane, Ox Nche and Steven Kitshoff start in the number one jersey. All men bring something different to the table, causing a welcome headache for Jacques Nienaber and Rassie Erasmus. Nyakane is strong and has the advantage of being able to pack down on either side of the scrum.

Nche is the most agile and skilled of these three while Kitshoff is a powerhouse and a menace at the breakdown. He is usually a member of the Bomb Squad, however, it may be time to diffuse this bomb early. Kitshoff is an incredible player and had a fantastic URC with the eventual champions – the Stormers. Whoever does start will be primed and ready given the intense competition for this position. It is a blessing to have such talent in one position.

READ | SPRINGBOK RATINGS: WHO FIRED AND WHO FLOPPED FOR THE BOKS IN HISTORIC WIN IN AUSTRALIA

This has been one of the key talking points from all the Boks tests this year. In some way or another, it has brought up some heated debate.

Since Bongi Mbonambi’s injury, Malcolm Marx has taken the opportunity with both hands (and shoulders). He has been one of the best players in the green and gold. He produced an incredible man of the match display against NZ in Nelspruit. Inspiring the Springboks to a record 26-10 win over the All Blacks.

When he was dropped for the tests against NZ at Ellis Park and Australia in Adelaide, the Boks struggled. Joseph Dweba has incredible potential but he crumbled under the pressure of both these test matches. Marx returned to the starting line-up against Australia in Sydney and was one of the best players on the pitch – making an astonishing 11 tackles.

Wiese had his worst performance for the Boks against Wales. His handling was poor, he struggled to get any go-forward momentum and his discipline was not great.

However, since then he has been an absolute beast. Vermeulen made a famous return to the starting line-up when SA took on NZ at Ellis Park but he was off the pace and he seems a tired shadow of his former self. While Wiese has grown in confidence and is truly making the number eight jersey his own.

Faf de Klerk is possibly the Bok with the most pressure of losing his position. He was lackluster in the first test against Wales at Loftus and was poor against Australia in Adelaide. In direct contrast, Hendrikse has been excellent, his Box kicks have been pinpoint while his delivery has been sharp and accurate.

He has stood out when it mattered, in the decisive test against Wales (30-14), the Rugby Championship opener against NZ at Nelspruit (26-10), and the Test match against Australia in Sydney (24-8), The Note how the Boks won all three of these test matches – convincly too. They beat the All Blacks, Wallabies, and Wales by 16 points when Hendrikse started.

Willemse is one of the finds of the season. Given the chance to finally start, he has flourished in every single test match – literally. He slotted an injury-time winner at Loftus and has provided an added and much-needed dimension to the Bok attack. He is as skillful and agile as he is composed under pressure.

The complete package and he just seems to get better with every match. Le Roux has also been excellent, igniting a spark in the Bok attack whenever he comes on. In my personal opinion, Willemse should start at inside centre ahead of De Allende with Le Roux at 15.

LET US KNOW WHAT YOUR BEST POSSIBLE STARTING XV IS FOR THE 2023 RUGBY WORLD CUP IN FRANCE IN THE COMMENTS SECTION BELOW!