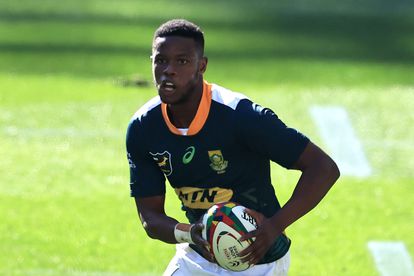 CAPE TOWN, SOUTH AFRICA – JULY 17: Aphelele Fassi of South Africa A breaks with the ball during the match between South Africa A and Vodacom Bulls at Cape Town Stadium on July 17, 2021 in Cape Town, South Africa. (Photo by David Rogers/Getty Images)

CAPE TOWN, SOUTH AFRICA – JULY 17: Aphelele Fassi of South Africa A breaks with the ball during the match between South Africa A and Vodacom Bulls at Cape Town Stadium on July 17, 2021 in Cape Town, South Africa. (Photo by David Rogers/Getty Images)

Aphelele Fassi is a truly special talent for the Springboks who will exhilarate rugby fans across the globe for many years to come.

Springbok coach Jacques Nienaber moved Fassi to the wing from fullback where he has predominantly played his rugby for the Sharks.

‘The Weekend Special’ is a literal human highlight reel. Culminating a package of skills, speed and talent on repeat for all to see.

Although he did not get a chance to feature for the Springboks in the prestigious three-match Test series against the British & Irish Lions, his potential and quality as a rugby player are undeniable.

FANTASTIC FASSI WAS SPECIAL FROM DAY ONE

Fassi burst onto the scene at just 19 years old and he did so at the highest level. Fassi was one of the best fullbacks in Super Rugby before it was called to a premature halt, as a result of the Covid-19 pandemic.

2020 saw the Sharks top the Super Rugby standings in March with Fassi at the forefront of their season.

Fast forward almost 18 months later and he is playing for The Springboks. Everything he touches turns to gold! His first-ever touch in the green and gold was a try.

The Sharks fullback has 2 tries in as many Test matches. Both tries were scintillating to watch and required the excellent finish that Fassi provided. The first was a 40m sprint down the touchline to go in at the corner.

His second try this weekend left many breathless, somehow gathering an Elton Jantjies cross kick with one hand while keeping it in play at full speed to dive in and finish off an incredible try!

It seems to be a masterstroke of a move indeed as the Sharks flyer seems a natural out wide.

Expect to see the new breakthrough sensation of SA Rugby in action for the Boks against Argentina on Saturday, 21 August.