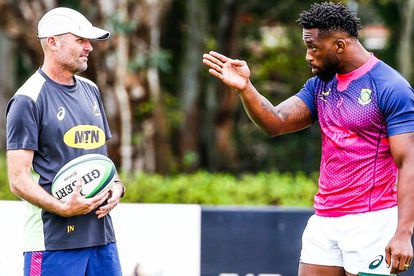 Springbok coach Jacques Nienaber expressed his satisfaction as a group of players wrapped up their first alignment camp in Durban on Tuesday, saying they achieved the goals set out as they step up preparations for the international season which starts with a three-Test series at home against Wales in July.

This first alignment camp will be followed by camps with the overseas-based players in England and France, as well as virtual meetings, all of which will take place between Saturday 16 and Monday, 25 April, and another in Cape Town from Sunday, 1 to Thursday, 5 May.

A group of 22 players attended the first camp, which featured eight information sessions presented by the coaching team to ensure the players are all on the same page in terms of what the Boks would like to achieve on the field, and the processes involved in being selected for the national squad.

The sessions touched on several different aspects of the game, including scrums, mauls, aerial skills, and conditioning, all of which contribute to optimal performance on the field.

“We are pleased with the outcomes achieved at our first alignment camp and I believe the players have a good idea of what is expected of them on and off the field as we look forward to a challenging international season,” said Jacques Nienaber.

“As I explained before the camp, the key for us was to inform the players of what the calendar will look like for the year and to paint the pictures we wanted to, so that we can ensure everyone is on the same page when we select our national squad for the series against Wales and then later in the Rugby Championship.

“Once we have finalised our squad for the Wales Tests, we will have a training camp where we will be able to put all of the aspects of the game we discussed into practice as we look to finetune certain areas of our game.”

Nienaber added: “Hosting these alignment camps will not only save time before our field sessions once the Springbok team get together, but it also gives the players a chance to start improving on certain aspects of their game individually as they continue their provincial commitments in the lead-up to the international season.”

Jacques Nienaber pleased with the atmosphere

Nienaber was also pleased with the atmosphere among the players at the camp.

“It was great to see how excited the players were to see one another and to witness their focus at the information sessions first-hand.

“The fine details are essential in winning Test matches, and that is something we tried to drill into the players minds’ at the alignment camp in the different aspects of the game, and hopefully we will reap the rewards of that when we take the field against Wales.

“Every match and training session will be vital for us as we prepare for this season and look further ahead to next year’s Rugby World Cup in France, so the more effective we are in every possible area of our game, the better we will become as a team.”