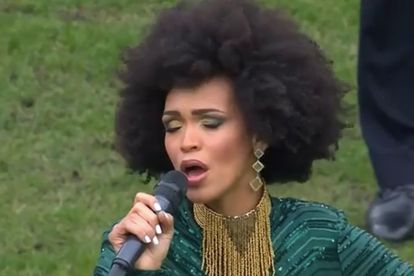 South African anthem singer Nicole Magolie has responded to the widespread criticism she has received following her rendition of Nkosi Sikelel’ iAfrika before the Test between the Springboks and Italy in Genoa last Saturday.

As is customary at any major sporting event, the national anthem of both teams are sung before kick off. And Magolie, a South African residing in Italy, was given the honour to belt out Nkosi Sikelel’ iAfrika.

However, her rendition of the multi-lingual South African anthem was poorly delivered, and brought on merciless ridicule and derision from social media users.

She was off-key from start to finish and the anthem was slow – to the point that it was almost offbeat – and laboured.

Magolie’s rendition of the anthem sent Springbok fans into overdrive on social media, with many comparing her performance to the infamous anthem rendition from Ras Dumisani before 2009 Test against France.

“Unfortunately, the conductor started too slow [sic]. I tried to pickup the speed but I had to follow the band… the acoustics also had a delayed effect on everyone involved, but [the] most important thing is the emotional aspect,” she wrote in the comment section of a post on Facebook, where the user mocked her performance.

LET THE DEBATE BEGIN | IS THIS THE SPRINGBOK TEAM TO SLAY ENGLAND?

In a second comment on the same post, Magolie added: “Seems the conductor was much more emotional than me.”

IN CASE YOU MISSED IT, YOU CAN WATCH A VIDEO OF SATURDAY’S ANTHEM BELOW:

Unlike Magolie’s poor rendition of the South African anthem, the Springboks put on a grand display to dismantle the Italians and secure a 63-21 victory.

Following the agonising defeats against Ireland and France, this confidence-boosting triumph against Italy came at just the right time, as the Springboks prepare to take on England at Twickenham next weekend.