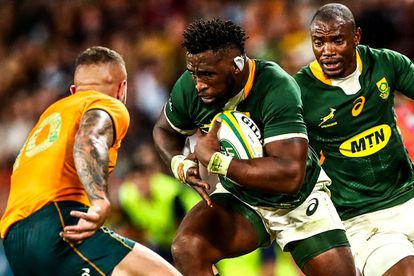 Bok captain Siya Kolisi emphasised the importance of good discipline and remaining focused for the full 80 minutes in their Rugby Championship clash against Australia at the Adelaide Oval on Saturday after the team wrapped up their preparations with the captains run on Friday.

Springboks assistant coach Mzwandile Stick, who played at the Adelaide Oval in his days as a Blitzbok, also stressed the importance of being mentally switched on until the final whistle, saying the Wallabies have shown that they are a force to be reckoned with at home.

RANKINGS: HOW BOKS CAN AVOID A FURTHER DROP!

“All our attention has been on Australia in the last two weeks and we also looked at their matches against Argentina, so we know what to expect from them,” said Kolisi.

“We have prepared well, we know what they are going to bring, and we know what we must improve on going into the game, so it’s going to be a big challenge.”

Kolisi added: “We had a meeting with the referee (Paul Williams from New Zealand), and we understand what he is looking for in the match, and as a team discipline will be key.

“We’ve conceded about seven penalties a match in the last few games, and we know it is going to be a vital area given the small margins in Test rugby, so the entire squad know that they have to stay disciplined for the full 80 minutes.”

Stick was wary of the threat the hosts posed and said: “If we don’t pitch up mentally, we will be punished. We watched the match between Argentina and Australia two weeks ago and we know it will be the same for both teams this week.”

Commenting on playing at the Adelaide Oval – the first Test the Boks will play at this venue in South Australia – Stick spoke highly of the quality of the pitch and said it brought back fond memories from his Blitzbok days.

“We had our captain’s run at the stadium and the pitch is looking good,” said Stick.

Zoning in on the game, Kolisi expected a big battle against the Wallabies loose trio.

“They have strong loose forwards who have been playing well. A guy like Rob Valetini has also been playing particularly well, so we know it is going to be about who dominates at the breakdowns and in the set pieces, so we are expecting a big battle.”

Stick, meanwhile, hoped that the backline would have the opportunity to showcase their skills, especially with exciting play-maker Warrick Gelant getting an opportunity on the right wing in a back three with Makazole Mapimpi (left wing) and Damian Willemse (fullback).

“We have a game plan we want our players to bring their X-factor,” said Stick. “Warrick and all the other players have the freedom to make decisions on the field and with him having played with Damian at the Stormers, we are hoping to see them combine well and show what makes them special.”

The match kicks off at 07h30 (SA time) and will be broadcast live on SuperSport.

KOLISI IS SET TO BECOME THE BOKS’ SECOND-MOST CAPTAIN

Kaizer Chiefs: Six players that could leave for NOTHING in June

Pregnant students in Tanzania could stay in school