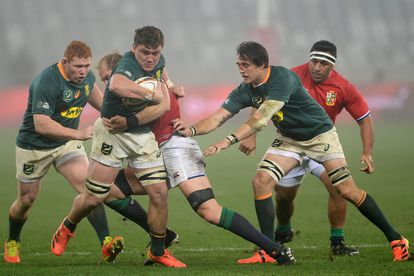 Jasper Wiese in action for the Boks. Photo: Ryan Wilkisky/BackpagePix

Jasper Wiese in action for the Boks. Photo: Ryan Wilkisky/BackpagePix

Salmaan Moerat and Elrigh Louw are in line to make their Test debuts from the Boks’ replacements bench against Wales in Saturday’s opening Test at Loftus Versfeld. It’s interesting that Nienaber has opted for Louw rather than Stormers superstar Evan Roos, but the fact that the Bulls forward can cover multiple positions in the pack does make him an appealing selection.

In the absence of injured Duane Vermeulen, the starting spot at eighthman will be filled by Leicester Tigers star Jasper Wiese, and it’s now clearer than ever that the Boks view him as a “long-term project”, with an eye on the 2023 World Cup.

“Jasper is a project, a long-term investment,” Nienaber commented. “He’s on 11 caps. When one thinks about planning for the World Cup next year, the ideal is to have a group of experienced players in your squad. It’s only natural then to want to have Jasper gathering more caps.

“Jasper’s been awesome. We do ‘roadmaps’ or performance analysis on players in our squad in detail. The players get reports once a month or whenever there’s a gap to have a chat.

“He’s been performing quite well for Leicester and, importantly, in the areas that we want him to perform in. “

Although Roos will have to bide his time before he receives an opportunity, Nienaber also explained that there is due process that must be followed before a youngster is thrown into the mix.

“Wherever there’s an opportunity, I’m pretty sure he’d take the opportunity with both hands. No matter where it is. The things we want guys like Evan and co to achieve is not necessarily just play Test matches, but having a role and responsibility outside of the Tests, preparing the guys involved in the 23.

“There are a lot of things we would like to see them handle. That puts them in a good position going into the World Cup.”

On the bench, Elrigh Louw is also familiar with the conditions on his home ground of Loftus, so it’s a perfect place for him to make his Test debut.

“We have a fantastic crop of young players who have really been working hard at training and putting up their hands, and it is pleasing for us as coaches to give Salmaan and Elrigh this opportunity,” said the Boks’ coach.

“Salmaan was with us on our tour to the UK last season, and despite being so young he brings a different sense of experience as a former Junior Springbok and SA Schools captain, while Elrigh also featured in a World Rugby U20 Championship and has been playing senior provincial rugby for a while.

“We have a plan for the season in terms of giving some of the young players a chance to show what they can do at international level, while at the same time taking stock of the seasoned campaigners and where they are in terms of their rugby.

“Unfortunately, with such a big squad there will always be a few unlucky players, but it is a fine balancing act to ensure we win Tests, build squad depth, and transform as a team in the way we play.”