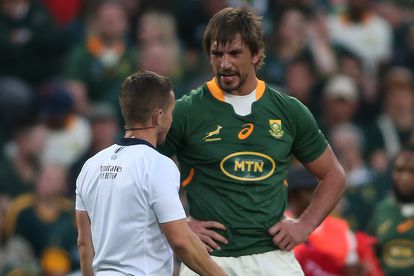 Lukhanyo Am’s stunning performance was ultimately in vain as the Boks suffered a heavy defeat to the All Blacks on Saturday. Just a week after South Africa dominated New Zealand from start to finish in the opening clash, this was a game where the visitors ultimately emerged as deserved victors.

Here we take a look at what was good, bad and ugly after an enthralling 80 minutes of action.

The good for the Springboks

There can no longer be any doubt that Lukhanyo Am is currently the leading player in world rugby.

This was another performance of immense class, with Am having to shift out to the wing after an early injury to Jesse Kriel. And yet he didn’t skip a beat.

Almost every time Am touched the ball, he produced something special, and ultimately deserved so much for his efforts.

According to Sanzaar’s stats, the Springbok superstar made a remarkable 144m, sevens carries, beat five defenders, made four clean breaks and of course scored a superb try.

Time and time again, Willemse emerges as a standout performer for the Boks. This was not the game where everything went his way, or that of the Springboks, but he still produced a herculean effort.

Willemse made six carries, beat three defenders, set up a classy try with an incredible pass and also completed the most tackles of any Springboks (14).

It’s been a while since Mapimpi has made headlines, but this was a game where he finally was able to enjoy some time and space on the ball.

In total, he completed 118m and made seven carries, to go with two clean breaks in addition to his well-finished try.

What an effort this was from Wiese, who came off the bench and produced an absolutely heroic performance.

He managed to complete 50m and seven carries, while also adding some much-needed physicality to the Bok effort.

The bad for the Boks

After the match, coach Jacques Nienaber insisted there were specific reasons behind the decision to start Joseph Dweba and Duane Vermeulen despite both lacking high-level game-time.

Ultimately, he insisted the selections weren’t a mistake, but both players were short of the pace and intensity needed.

There is no doubt about the ability that Dweba possesses, but after such limited game-time before this Test, it was clear that he struggled to step up to the level required.

A couple of poor throw-ins at the lineout early on unfortunately served as a microcosm of some of the troubles to come for the Boks, and the hooker was ultimately replaced around the half-an-hour mark.

It’s not often that Vermeulen doesn’t feature among the Boks’ top performers, but he battled to make his usual impact after returning from injury.

Similarly to Dweba, it’s clear that Vermeulen was just short of high-intensity game-time, and the decision to also replace him just before half-time spoke volumes.

As is so often the case when the Springboks lose, the referee inevitably comes under the spotlight for potential game-changing decisions.

Almost inevitably, referee Luke Pearce found himself at the centre of plenty of debate as the All Blacks scored two tries in the final seven minutes to regain the lead and claim a 35-23 victory (halftime 15-10), with many South African supporters lamenting some of his decision-making.

Many felt it was a harsh decision to rule out a try to Makazole Mapimpi after penalising Jaden Hendriske for running a blocking line in the build-up. That decision from the referee effectively resulted in a crucial 10-point swing.

However, perhaps a more blatant error actually came earlier in the game when Pearce ruled out a try to Lukhanyo Am due to a knock-on in the lead-up to the try.

Yet replays clearly showed that the ball had in fact been ripped from the grasp of ball-carrier Ox Nche, and had not been knocked on.

Even when this point was made by Siya Kolisi, Pearce insisted that they would just have to “agree to disagree” rather than ask for the TMO to have a look.