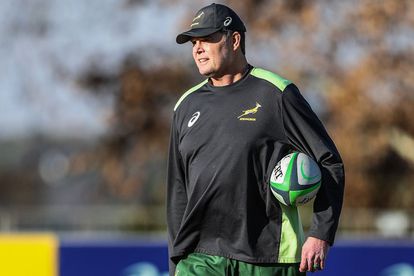 Rassie Erasmus was no where to be seen at Twickenham – apart from masks in the crowd – during the Springboks’ Test against England on Saturday as he began serving his two-month ban from all rugby.

One can assume he watched the Test from somewhere in the world – or perhaps he just followed The South African website’s online coverage!

Erasmus took to Twitter in the early hours of Sunday morning to raise a glass (of something liquid) and simply wrote: “Congrats England”.

England snatched a last-minute 27-26 victory over the world champion Springboks in a thrilling, yet ill-disciplined Test.

READ | SPRINGBOKS BEATEN AT THE DEATH BY ENGLAND

Curiously, in the background of the eight-second clip there was tennis commentary playing with the names ‘Stefanos Tsitsipas’ and ‘Andrey Rublev’ clearly heard.

Last week World Rugby came down hard on both SA Rugby and Rassie Erasmus in its verdict following their two independent misconduct hearings.

As part of the judgement after World Rugby issued a charge of misconduct, Rassie Erasmus was suspended with immediate effect from all rugby activities for two months.

In addition, he was suspended from all match-day activities (including coaching, contact with match officials, and media engagement) with immediate effect until 30 September 2022.

The ruling also includes “a warning as to his future conduct and an apology to the relevant match officials”.