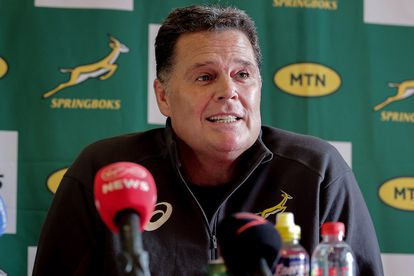 On Thursday night, World Rugby dramatically issued Rassie Erasmus with a ban on all match-day activities for two matches as a result of recent social media posts, which were deemed to be critical of officials.

It’s been a highly controversial period once again for the Springboks and Erasmus, and when writing in his column for Sport24, Nick Mallett slammed the approach taken by the director of rugby.

“South Africa – without any doubt – is the least-liked team in the world at the moment, and it’s because of the way Rassie has pointed fingers at referees. Referees know they are in a tough position in a highly-paced game where it is easy to miss things and make mistakes, and Rassie has relentlessly highlighted those mistakes in a visible way on social media, launching attacks on refereeing standards.

“There is a very strong feeling amongst World Rugby and the referees that they’re not prepared to have this battle between themselves and one coach after every game, even when he is not overtly criticising, but sarcastically pointing out flaws. Rassie is not stupid, and neither is World Rugby, and they know exactly what he is trying to do. The way you manage a referee – between your captain and coach – is absolutely critical to getting 50/50 decisions going even-handedly your way and the opposition’s way.

“But the impression we get from Rassie is that it’s always South Africa who get the short end of the stick and that we are suffering the most. There were those injustices in the last 10 minutes against France, and, as a coach, you get very emotional about them. Unfortunately, I’m convinced that the reason we’re not getting good calls in those moments is because he keeps pointing them out and keeps on showing refereeing incompetence.”

In reaction to the widespread backlash from these posts, Erasmus appeared at a press conference on Tuesday, where he sought to set the record straight by explaining that he was simply looking to keep the broader South African rugby public well informed.

World Rugby have been notably silent on the matter, but on Thursday the organisation issued a statement to confirm the following:

Match officials are the backbone of the sport and without them there is no game. World Rugby condemns any public criticism of match official selection, performance or integrity, which undermines their role, the trust-based coach/match officials feedback process and the values of integrity, respect, solidarity and discipline that are at the heart of the sport.

The behaviour of coaching staff and match officials are widely observed by fans, media and participants at every level, and such behaviours affect how the values are applied across the game.

In addition, under the Match Officials Communication Framework, national teams have the ability to enter into a confidential feedback process, which is critical for success in a high-performance environment. The success of these communications relies on direct and honest feedback which is delivered and received in a confidential way.

In line with the Framework, World Rugby has the ability to impose a sanction where a breach has occurred. Having considered the matter World Rugby has issued a two-match ban against Rassie Erasmus and accordingly he may not take part in any match day activity in relation to the two upcoming test matches that South Africa has against Italy on 19 November, 2022 and England on 26 November, 2022. The ban includes engagement with media and social media in relation to match officials.

Earlier on Thursday, in an interview published on RugbyRama, there were some notable comments made by Joël Jutge, who is head of the organisation’s match officials.

Jutge added that the attitude of Erasmus was a concern to World Rugby, but he didn’t provide any clarity over whether another sanction could be possible.

“His attitude is a concern for World Rugby and Rassie Erasmus’ peers do not share his way of doing things. It is contrary to our values, even if this word is sometimes overused. Erasmus does not serve his cause and it is surprising to see him continue in this way.

“All referees are affected by these attacks on referees in general and Wayne Barnes last weekend. Because by doing so, Rassie Erasmus opens the door to violent behaviour and behind it, entire families are insulted and affected. It is extremely dangerous. But some people think that if the South African coach talks about a referee like that, they have the right to do it too…”

Below, you can watch what Rassie had to say earlier this week, and make up your own minds.