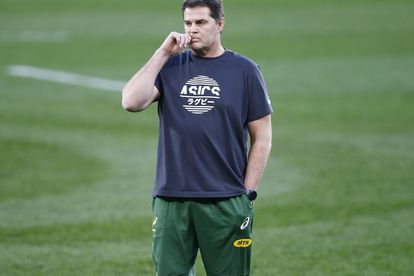 Controversial former Springbok coach Rassie Erasmus is likely to be back with the team on their end-of-year northern hemisphere tour. Photo: Archives

Controversial former Springbok coach Rassie Erasmus is likely to be back with the team on their end-of-year northern hemisphere tour. Photo: Archives

SA Rugby Director of Rugby Rassie Erasmus watched the Springboks beat the All Blacks in their Rugby Championship Test in Gold Coast from the comfort of his own home.

In his boxers while drinking a beer!

Boxers in the early afternoon on a weekend … we’re happy with that.

Erasmus appeared to be following the match while conversing with current Springbok coach Jacques Nienaber via Zoom.

Let it never be said Erasmus isn’t passionate about the Springboks!

WATCH | SPRINGBOKS V ALL BLACKS: HIGHLIGHTS OF THE TEST OF THE YEAR!

It’s been a tough last few months for Erasmus who is still awaiting details of his World Rugby disciplinary hearing after a video he made highlighting errors – in his opinion – made by match officials in the opening Springboks v British & Irish Lions Test in particular back in July went viral.

Rassie Erasmus did not join the Springboks on their four-Test trip to Australia where the team lost back-to-back Tests to the Wallabies and ‘shared’ their two Tests against the All Blacks one apiece.

GALLERY | SPRINGBOKS AND ALL BLACKS HUG IT OUT AFTER EPIC TEST