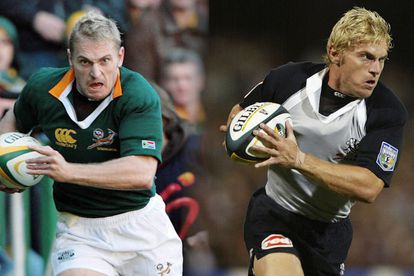 When looking back at the history of the Boks since the game turned professional, there is no doubt that some players never received the opportunities or plaudits that they perhaps deserved. In a series reflecting on the careers of those Springboks who may have been unappreciated for what they could bring to a team, utility back Brent Russell stands out as a player who was ahead of his time.

Russell falls into two categories that have regularly beset other South African players – 1: Size counting against him. 2: The versatility tag.

Before a rather recent shift in perspectives towards diminutive players such as Cheslin Kolbe, Russell was one of those smaller players who battled to find consistent backing at Test level. Of the 23 Test caps earned by the former pocket rocket, he only started in seven matches.

Russell also has the unique distinction of having played in every position in the backline. He made his debut as a replacement flyhalf, while he would make seven appearances at fullback, nine on the wing, and two at centre.

In 2004, the versatile back even came on as a substitute scrumhalf in the latter stages of a Test against Wales in Cardiff in November 2004.

All that aside, Russel was one of the most electrifying players in the international arena, with his pace, stepping ability and natural attacking strengths setting him apart in the era from the early to mid-2000s.

Check out all Russell’s Springbok stats and facts HERE