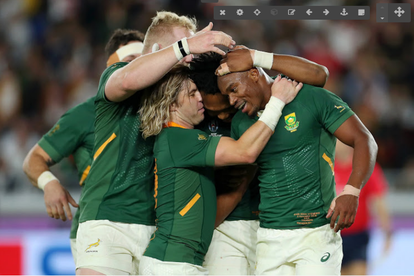 The Springboks and Sharks will be over the moon at the return of one of their most instrumental stars – just in time!

Lukhanyo AM will be returning from Japan just in time for their crucial decider against Ulster in the United Rugby Championship.

The Sharks will take on Ulster on the 20 May with an opportunity at securing a home quarter final. AM will wrap up his season in Japan on Sunday, according to SARugbyMag. This means that the skillful Bok centre will be able to start training with the Sharks next weekend. He will back in training with the Natal-based outfit next week and ready to play his part in their historic run.

READ | SPRINGBOKS TO FACE WALLABIES FOR THE FIRST TIME IN ADELAIDE

In what is essentially all South Africans side’s first run in the URC, they are looking to leave a mark. That is exactly what they have done in recent months. Since the SA leg of the competition, the Sharks, Stormers, Bulls and Lions have dominated their European opposition – only losing twice well collecting several bonus point victories in the process.

Our franchises have gone from languishing in the bottom half of the competition to securing three of the quarter finals berths. We are also well positioned to have two home quarter-finals.

AM returns just in time to inspire a much-needed victory in Ireland. He is also back in time to train alongside his Springbok teammates – Ox Nche, Bongi Mbonambi, Jaden Hendrikse and Makazole Mapimpi.

This will serve the Boks well as they aim to establish continuity ahead of the incoming series against Wales. Am is an instrumental part of SA rugby, both as a Sharkie and Bok centre. His return will be welcomed by Rassie Erasmus and Jacques Nienaber as well as Sharks head coach Sean Everitt.

“Lukhanyo will be back, he finishes up in Japan next week and we are looking forward to having him back in the following week. We haven’t watched any of his games, but I have chatted to him on a weekly basis and he is in a good space and really enjoying the opportunity that he has over there,”

“He is playing with international stars in his team over there and obviously being coached by really good coaches. We are looking forward to him coming home and sharing the knowledge that he has gained from there,” Everitt stated on SARUGBY.