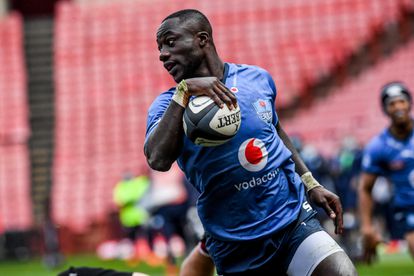 Bulls winger Madosh Tambwe has been in terrific form for the Tshwane-based side this season, attracting links to the Springboks.

Tambwe’s incredible run in the Bulls jersey has seen calls for him to be included in the Springbok squad for the June internationals.

Springboks set to take on Wales in July Tests

The Springboks are scheduled to take on Wales in the in the June internationals, with quite a few players from the country’s United Rugby Championship unions, looking to impress in order to crack the nod in coach Jacques Nienaber’s latest squad. Tambwe will undoubtedly be one of those players that the national team regime would have been looking at, pending his eligibility.

Another advantage for Tambwe might be the currently injury situation pertaining to current Springbok squad member and World Cup winner Sbu Nkosi. Nkosi, who has been heavily linked with a move to the Bulls himself, has had a stop-start couple of seasons at the Sharks due to injuries, and his inconsistent form could then pave the way for Tambwe to replace him in the next squad announced by Nienaber.

Born in the Democratic Republic of Congo, Tambwe was raised in South Africa, where he was schooled at Parktown Boy’s High School in Johannesburg. Tambwe played first team there before going up the ranks at the Lions. It would then be no surprise if he had ambitions of playing for the Springboks like any other kid growing up with the oval in the country. It looks like it was no different for the powerfully-built winger, who revealed he would be excited to be in the squad.

“For me, it would be massive to get called up to the national team (Springboks), and I’m excited you know? And I’ve got fingers crossed that I do find myself in that set of players that make it to the June Tests” Tambwe enthused to the media on Monday.

Tambwe is also rumoured to be on his way out of the Bulls, with a mooted move to France said to be on the cards. A Springbok call up before he leaves, would be a great icing on the cake for him, undoubtedly.