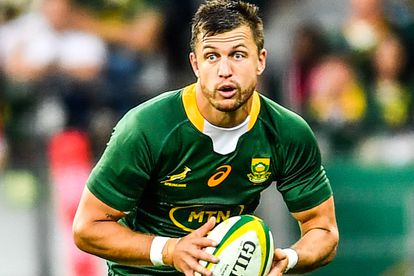 In the middle of the Rugby Championship, it was confirmed that Pollard had picked up a knee injury and although it was initially thought that he may be out of action for six weeks, subsequent reports indicated it could be longer than that.

Bok coach Jacques Nienaber recently suggested it was unlikely that Pollard would be available for the Boks’ upcoming end-of-year tour, but there has been a positive update after the flyhalf underwent further assessments at English club, the Leicester Tigers.

It’s reported that Pollard was already a  travelling reserve for Saturday’s victory over Northampton Saints.

“The body is good,” he said. “I am really coming along nicely. [I’m] Just trying to get as much done as possible. I’ve still got a couple of boxes to tick, from the initial diagnosis we had in Australia, I’ve come back to London and got a different one, which was a lot more positive. I’m working hard, it’s really feeling good, so we will see how we go on from here.”

It’s already been confirmed that Pollard did not suffer a recurrence of an ACL rupture that he suffered during his time playing in France.

“This is completely different,” he said. “It’s a little bit of a tear in the meniscus. It’s a lot better than we originally thought and it’s going really well. We’re still taking it day by day. We’ve still got a couple of boxes to tick but I am very excited and optimistic. I should be good to go for the Autumn series.”

After Pollard was injured, Damian Willemse shifted to flyhalf before suffering a concussion that left the Boks in a position where they had little option but to turn to Frans Steyn, who last Saturday started his first Test at 10 since 2008.

The Springboks currently find themselves in third place in the latest World Rugby rankings following the conclusion of the 2022 Rugby Championship.

Tournament winners, the All Blacks, are in fourth.

Ireland continue to lead the way ahead of France, while Australia have plummeted to a lowly ninth place, below Argentina who finished bottom of the Rugby Championship log.