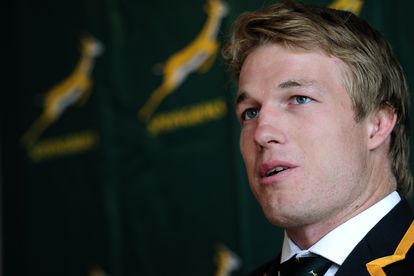 Bulls coach Jake White has reiterated his belief that the Springboks should no longer continue selecting overseas-based players.

Towards the end of last year, the Bulls confirmed that they had agreed to an early release for prop Trevor Nyakane, who will be joining French club Racing 92, while superstar wing Madosh Tambwe is also making the move abroad.

It adds to a local landscape where numerous current Springboks play their rugby overseas, with SA Rugby having adopted an ‘open policy’ to picking players based abroad.

South Africa’s director of rugby Rassie Erasmus has widely acknowledged that SA Rugby simply can’t afford to keep many of the leading players in the country due to the current exchange rate and nature of the lucrative offers that come in from cash-flush overseas clubs.

From a Springbok perspective at least, the approach is to allow for overseas teams to effectively have South Africa’s leading players on their payroll, while the Boks can still benefit from selecting them.

White has spoken extensively about his belief that it is not in the best interests of franchise strength to keep allowing overseas-baed players to be so readily available for national selection.

The Bulls coach once again touched on this viewpoint after this past weekend’s URC final defeat to the Stormers.

“It shouldn’t be allowed,” said White. “They can’t be overseas and then come back and be a Springbok. It cheapens everything we stood for.

“The reality is quite simple. Why would you stay in SA? Ask every guy if he’d work in London for double his salary or stay here and the answer would generally be the same because they can come back and play for the Boks too.”

“We can build a team now and in two years all of them disappear. How do we make franchises stronger?

“I’m obviously excited by my players’ development but how can I tell them to trust me that in four years we’ll demolish everyone if I have no hold on them? It’s another thing in SA Rugby that we just can’t control.”

Jake White has been outspoken on this issue before

With the likes of Nyakane and Tambwe joining a legion of South Africans playing overseas, former Bok coach White believes a conversation needs to begin around this subject.

“Now is a good time, before the next contracting cycle, for SA Rugby to draw a line on picking players who are contracted to overseas clubs,” the Bulls director of rugby told SARugbymag.co.za earlier this year.

“South Africa are world champions and SA Rugby did something that has worked because, in 2018 when Rassie Erasmus was appointed, the current cycle of Springbok players were all overseas. But we can’t allow that with the next cycle of players.

“South African franchises have basically become academies for overseas clubs,” said White. “Because the top senior talent is overseas, we play juniors from school who wouldn’t otherwise have been involved in senior rugby, and then when those youngsters are 21 or 22, they’ve got experience under the belt and the overseas clubs sign them and have them for the peak of their careers.”