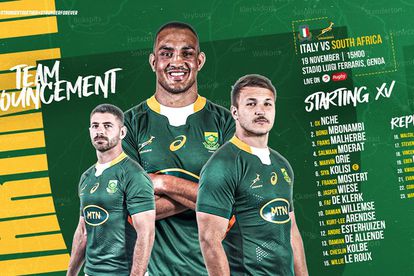 The Springboks will face Italy in Genoa on Saturday. Photo: SA Rugby website

The Springboks will face Italy in Genoa on Saturday. Photo: SA Rugby website

On Tuesday, Springboks coach Jacques Nienaber unveiled the team to face Italy, with Andre Esterhuizen and Damian de Allende interestingly named as a new-look midfield partnership, while Salmaan Moerat and Marvin Orie will pair up in the second row.

Jasper Wiese (No 8) also returns for the third Outgoing Tour match as Nienaber made four changes and two positional switches for the Test. Wiese was a late withdrawal from the match against France in Marseille last week and will take over from Kwagga Smith, who will start among the replacements.

The Springboks also handed starts to Moerat and Orie, with Lood de Jager having returned home with a shoulder injury, and Eben Etzebeth dropping to the bench. Esterhuizen will earn a long-awaited start at inside centre, while Damian de Allende shifts to 13 in place of Jesse Kriel.

The other positional switch sees Franco Mostert move from lock to flanker in place of Pieter-Steph du Toit, who is awaiting a disciplinary hearing on Wednesday for a red card received against France for cleaning out a ruck dangerously.

No 8 Evan Roos, meanwhile, will feature on the replacements bench alongside forwards Etzebeth, Smith, and the front row of Steven Kitshoff, Vincent Koch (both props) and Malcolm Marx (hooker) in a split of six forwards and two backs on the bench. Cobus Reinach (scrumhalf) and Manie Libbok (utility back), in turn, will provide backline cover, with Libbok able to cover flyhalf, centre, wing and fullback.

Nienaber said they felt these changes would best suit the team against an unpredictable Italy side.

“A couple of players have been training very hard in the last few weeks and deserve a chance to start, and Lood’s injury and Pieter-Steph’s disciplinary hearing opened the door for us to give them an opportunity,” said Nienaber.

“Salmaan and Marvin are both Stormers players, so they have been playing together for a while, and they are very hungry for game time, so we are looking forward to what they bring in the game.

“It’s also good to have Jasper back against the physical Italian pack, and we know that Kwagga will spark something different when he takes the field. Evan also gets a chance off the bench and his skills will work well with Kwagga’s in the loose trio, while Manie earns another run after making his debut last week.

“Manie’s versatility will also come in handy, as he can cover most positions in the backline, and with Cobus on the bench and several experienced backs in the backline, he will have enough guidance to be able play to his game.”

Nienaber also explained the thinking behind the new-look midfield combination.

“I thought Jesse did well, but some of our players won’t be available against England because it’s out of the Test-match window — and Andre is one of them. He has been with us now for the whole year, and he has been training well and deserves a chance. We always earmarked this game, if there wasn’t injuries, to give him a proper go.

“We think the combination with Andre and Damian is a great combination, especially if you face a side like Italy. But certainly, Jesse was exceptional in the last two games that he played for us.”