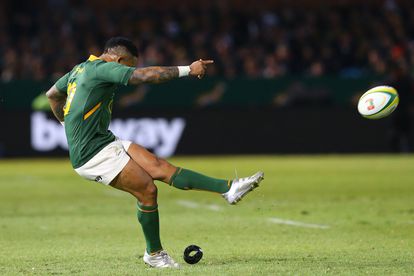 Springbok coach Jacques Nienaber has defended Elton Jantjies’ horror 40-minute performance showing against Wales at Loftus Versfeld in Pretoria on Saturday – and suggested he will be better next weekend!

When asked post-match about the decision to start Jantjies at flyhalf – despite the 31-year-old’s well-documented off-field problems – Nienaber defended the experienced playmaker.

“Elton probably played less than 30 minutes this year. He did his shoulder and went through his rehab, but his Japan club did not go into the final so there weren’t any games to expose him to. The only exposure he had this whole year was in training.

“We needed to get him in some games. It will always take some time for a guy who has been out for such a long time. Lucky for us, he got 40 minutes under the belt today. You can train as much as you want, but there’s no pressure there. It was good to expose him to Test-match rugby,” Jacques Nienaber said.

Jantjies struggled with his tactical kicking, missed a couple of attempts at goal and even kicked one penalty ‘dead’ beyond the goalline as Wales took a shock 18-3 lead into the half-time break.

Elton Jantjies was substituted at half-time

The former Lions pivot didn’t emerge for the second half, with fullback Damian Willemse moving to the No 10 berth and Willie le Roux coming on in the No 15 position.

Things instantly improved as the Springboks scored five second half tries to win the Test 32-29.

Jacques Nienaber will have fans believe that the decision to substitute Elton Jantjies at half-time was NOT performance-related.

“No. The plan is to take a guy off whenever you feel like he has given everything. Sometimes, we will substitute a guy after 32 minutes and we have done that before. Once we feel they have done their jobs and what we have wanted to see, then we sub them.

“You must take performance in context. He hasn’t played any rugby. We expected it to be tough. It was good to get him 40 minutes. He will be better next week.”

The Springboks and Wales will clash in the second Test in Bloemfontein on Saturday, 9 July before wrapping up their series at the Cape Town Stadium on Saturday, 16 July.

Both those matches will kick off at 17:05 – with Springbok supporters no doubt holding thumbs Handre Pollard is fit to take over in the flyhalf jersey.