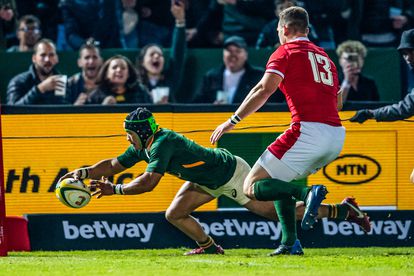 Springboks coach Jacques Nienaber will announce his 23-man squad to face Wales in the second Test in Bloemfontein on Tuesday afternoon.

It took a late penalty from Damian Willemse for the Springboks to snatch victory from the jaws of what would have been a humiliating defeat in the opening encounter last Saturday in Pretoria.

Springboks ‘will be better’ in second Test in Bloemfontein

The good news for Springbok fans, though, is the fact that the world champions should be far better in next weekend’s second clash after shaking off the cobwebs at Loftus Versfeld, while there should be two key players returning to the run-on XV.

Elton Jantjies endured a shocker in Pretoria and was replaced at half-time, with the 31-year-old clearly battling with form and confidence after recently recovering from a serious shoulder injury.

Handre Pollard is back in the Springbok camp after belatedly linking up with the squad after winning the Top 14 with French club Montpellier, and he should now be an automatic selection in the No 10 jersey this weekend.

Some have suggested he should be phased back off the bench, with youngster Elrigh Louw perhaps then earning a promotion to start at blindside flank in place of Franco Mostert.

Yet it’s most likely that the Springboks will not want to rush Louw straight into frontline action, and instead it should be Du Toit who reclaims the No 7 jersey.