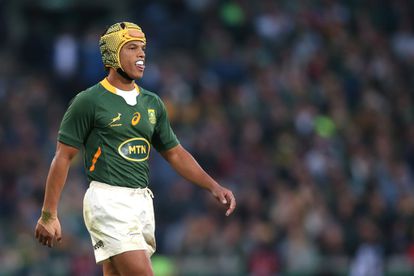 From Paulus Joubert Secondary in Paarl to the WP Academy, UWC, the Blitzboks and ultimately the Springboks, this is the story of how rugby changed wing Kurt-Lee Arendse’s life.

A former sevens star, Arendse was drafted into the Springbok fold earlier in the year and went on to make his debut against Wales during the mid-year Test series in July. He has scored four Test tries to date.

Arendse was suspended from all forms of the game up to and including 17 September 2022 following the well-publicised incident with Beauden Barrett, which saw the Bok wing accidentally take out the All Blacks star while he was jumping to catch a contestable kick during a Rugby Championship game.

Arendse returned for the clash against the Argentina and scored a memorable try off the bench, which was enough to secure him a ticket on the Springboks’ end of year tour. He started and scored in both of South Africa’s Autumn Nations Series Test defeats against Ireland and France and has once again been selected in the side to take on Italy on Saturday.

But long before Arendse became part of and cemented his place this Springboks squad, he was just a regular kid at Paulus Joubert Secondary in Paarl, dreaming of becoming a professional rugby player, the same way has his early childhood friend, Grant Williams had.

As fate would have it, both are now capped Springboks, although their paths to the top were very different.

Post-matric, Arendse went to the Western Province Academy, played for UWC in the Varsity Cup and ultimately starred for the Blitzboks in the abbreviated form of the game. A move to Bulls followed and it was his consistent performances for the Pretoria side that led to his promotion to the Springboks.

Watch the inspirational story of Kurt-Lee Arendse’s mercurial rise below: