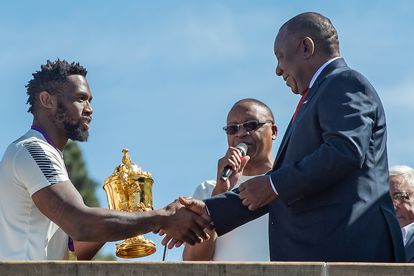 President Cyril Ramaphosa has remained in high-level talks with South Africa’s ruling party and various confidantes as pressure mounted for him to quit or be forced from office. On this Flashback Friday, we take a look back at Ramaphosa’s special history with the Springboks, particularly at the 2019 World Cup, when he shared an inspiring message with the team – both before and after the triumphant final.

You can watch some of the flashback videos related to Ramaphosa and the Springboks below:

Ramaphosa was also at the Yokohama Stadium in Japan to celebrate the Springboks winning the Rugby World Cup for the third time, and after the match, he penned a beautifully-written tribute about the pride he felt when he watched Siya Kolisi lift the Webb Ellis trophy.

“I could see the undisguised emotion on the face of his father, Fezakele Raymond Kolisi, watching from the stands. There was his son, the first black captain of the Springboks, making history,” wrote Ramaphosa.

“Siya’s captaincy not only epitomises the transformation of a sport that was once racially segregated; it is the power of a dream fulfilled. This is the dream of a young man of humble circumstances to one day wear the green and gold jersey, and of a country that has enabled him to see it realised.

“When Caster Semenya crosses the finish line, when Banyana Banyana find the back of the net, when Chad le Clos lifts his gold medal, when our national netball team, the Proteas are crowned Africa champions, all of South Africa is cheering on the sidelines. After generations of division, we have become a people with a great sense of national pride.

“But we are not only united by the achievements of our sportstars or internationally acclaimed performers, like the Ndlovu Youth Choir. We are also united by a shared desire for a country where all can live in peace and comfort, where all have an equal chance to achieve their potential.

“We are united by the vision of a country where the divisions of the past can be overcome, a nation of equality, dignity and respect for human rights. Over the past 25 years, we have been working together to build that nation. And while this is still very much a work in progress, we are firmly on the path to unite, renew and transform our society.

“We often fail to appreciate just how far we have come since that iconic moment in 1995 when a South African first held aloft the Rugby World Cup trophy in building a society that offers equal opportunity to all regardless of race, gender or social circumstances.”