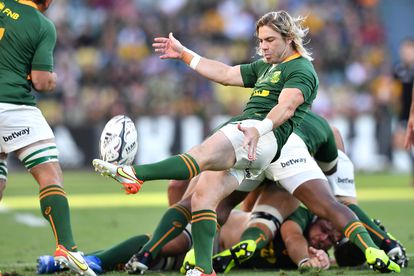 Faf de Klerk said he wants to “irritate” his fellow Springboks in Japan after becoming the latest South African to join the country’s league. Photo: EPA

Faf de Klerk said he wants to “irritate” his fellow Springboks in Japan after becoming the latest South African to join the country’s league. Photo: EPA

The feisty scrumhalf has signed for Yokohama Canon Eagles after leaving Sale Sharks at the end of last season following five years with the English Premiership club.

The 30-year-old joins several of his 2019 World Cup-winning Springbok team-mates in Japan and he said he is looking forward to “getting under their skin” when they face each other next season.

“Maybe Malcolm Marx, I’m very good friends with him,” De Klerk said of the Springbok forward, who was one of seven Japan-based players called up for South Africa’s series against Wales earlier this month.

“I’ll see if I can make him angry and he’ll make some mistakes.”

Speaking at the same Yokahama stadium where he helped South Africa beat England in the World Cup final three years ago, De Klerk said he wanted to help Canon become “one of the best teams in the world”.

He will line up alongside Springbok team-mate Jesse Kriel at Canon, who finished sixth in the 12-team Japan Rugby League One championship last season.

Faf de Klerk said he was “definitely looking forward to a new challenge” after leaving Sale, where he made more than 100 appearances.

“If you get comfortable in life, you stop growing,” he said.

“I really think I can still improve my game a lot so this is another big challenge for me and one that I’m very excited to take on.”

De Klerk famously stripped down to a pair of South African-flagged swimming briefs to celebrate his country’s World Cup win, and he said he would “see if we can’t get some Canon Eagles swimwear for the whole team”.

Faf de Klerk was benched for Springboks’ most recent Test

He said he intends to “immerse” himself in Japanese culture and arrives with strong recommendations from his fellow South African who play in the country.

“You don’t play as much rugby in League One as you do in Europe or South Africa, so you can stay fresher and play longer in Japan,” he said.

“Everybody loves it, the culture is amazing.”

De Klerk started South Africa’s first Test win over Wales in Pretoria this month but he lost his place to newcomer Jaden Hendrikse for the remaining two games.

He is confident his move to Japan will not jeopardise his place at next year’s World Cup, saying “as long as I play well, I’ll still be in the mix with the Springboks.”

“If you look at the quality of players here that play for the Springboks, I think the coaches can see how well the guys are adapting over here and how well they are playing,” he said.

“I think it might just show the quality of the league now so I don’t think that’s a worry.”

Drunk driver numbers are worst in THIS province in Mzansi