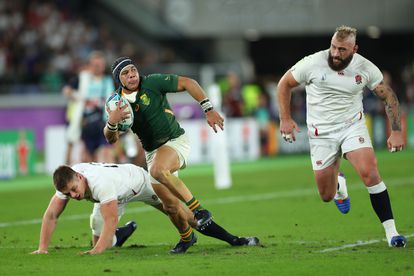 The Springboks will be without six key players for next week’s Test against England at Twickenham after they were recalled by their European clubs.

The Springboks will take on Italy in Genoa this coming Saturday and before traveling to London for their final Test of the year against Eddie Jones’ men.

However, South Africa have been dealt a significant blow following confirmation that Cheslin Kolbe, Andre Esterhuizen, Jasper Wise, Cobus Reinach, Vincent Koch and Trevor Nyakane would not be available for selection.

This is because the highly-anticipated showdown between the bitter rivals falls outside the traditional World Rugby Test window and clubs have the right to veto their players’ involvement with their nationals teams.

This means the above mentioned players have to report for club duty within a day or two after the Springboks’ Test against Italy.

Coach Jacques Nienaber had hoped that some of the clubs would be accommodating as to allow players to stay for the extended one-week period, but he’ll now have to call-up players from the South African ‘A’ team to fill his squad.

“That is why selected a South Africa A team to play two games against Munster and Bristol,” director of rugby Rassie Erasmus said.

“Since there are not United Rugby Championship matches at the moment, we had to find alternative ways to keep the players, we want to involve in the England Test, match fit.”

Talking about the selection process for the Test against Italy, Nienaber said that Esterhuizen was picked because it would be the only chance reward him for all the hard work he has put in.

“This is our final opportunity to reward him,” Nienaber explained. “We also think he and Damian de Allende would work well as the midfield combination against Italy.”