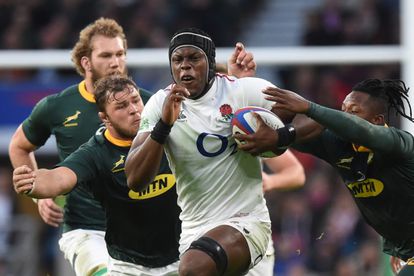 England lock Maro Itoje on the run against the Springboks.

England lock Maro Itoje on the run against the Springboks.

England lock Maro Itoje says the Springboks still employ the same tactics as they did when first introduced to Test rugby, hinting that South Africa’s style of play lethargic.

Itoje was part of the England side that were thrashed 32-12 by the Springboks in the 2019 World Cup final in Japan. The 28-year-old was also a starter in last year’s rematch between the teams when England claimed a dramatic 27-26 win over Springboks at Twickenham.

Speaking at a media engagement in the lead-up to England’s season finale against the Springboks, Itoje took a swipe at South Africa’s game plan, which he believes hasn’t changed since the country’s first ever Test.

It’s unclear whether the England lock meant since the Springboks’ first-ever Test in 1891 or the first Test since readmission in 1992.

However, judging by his statement, the insinuation from the England lock is that South Africa have yet to develop an efficient attacking strategy.

Last Saturday at Twickenham, England fired late to rescue a 25-25 draw against the All Blacks, after a poor first half performance in the game.

The England lock now says he hopes that a better overall performance than the one against New Zealand, will help them see off the Springbok challenge.

“Playing South Africa at Twickenham – I’m really looking forward to it. I only wish the game is a little bit sooner because we left a lot out there against New Zealand,” Itoje said.

“While the second half was a bit more how we want to play, next week is an opportunity to hopefully play how we want to play for the full 80 minutes. We have an incredible amount of potential in this team, we just need to unlock it. We are spending more and more time together and are becoming more cohesive, so hopefully it will come.”

“I’m proud that we stuck at it and we didn’t go away and proud that we played some great rugby towards the end of that game, but we need to play like that for the whole game. You never want to be too happy with a draw, but it’s better than losing. Hopefully, it will put us in better stead for South Africa who will be a great challenge.”