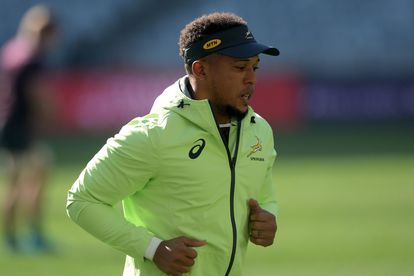 Elton Jantjies will reportedly to be asked to leave his Japanese club Urayasu D-Rocks at the end of the year.

The Springboks sent Jantjies home from Argentina last weekend after alleged accusations, among other things, that he had an affair with team dietician Zeenat Simjee.

According to an article in Rapport newspaper, Jantjies allegedly spent a night with Simjee at a guesthouse in the week leading up to the opening 2022 Rugby Championship Test against the All Blacks in Nelspruit in early August.

Both Jantjies and Simjee have subsequently denied the allegations.

However, as reported by The South African website, Jantjies’ statement on the matter didn’t impress – or persuade – readers that he was in any way innocent.

In his statement, Jantjies said “I deeply regret my actions” and admitted “I did not do the Springbok jersey proud”.

Elton Jantjies did not apologise to his wife

Curiously, he didn’t make mention of his wife, Iva, who is currently in Japan with their three children.

According to a Rapport source, Iva wrote a letter to Urayasu D-Rocks pleading that her husband’s contract not be terminated immediately.

“The club is gatvol of him. They are going to keep him until December – when the school year comes to an end – and then the Jantjies have to pack their bags,” said Rapport’s source.

“The club is only keeping him because they feel sorry for Iva and the children.”

While Iva didn’t speak to Rapport on Saturday because she “is no longer allowed to talk to the media”, she was asked earlier by the newspaper if she believed her husband when he denied the allegations of the affair.

The Springboks beat Argentina 36-20 on Saturday.

The sides will do battle once again at Hollywoodbets King’s Park on Saturday, 24 September.