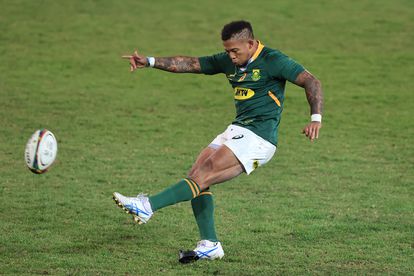 Rugby World Cup-winning Springbok flyhalf Elton Jantjies was released on bail after being detained in Johannesburg on Sunday. Photo: Archives

Rugby World Cup-winning Springbok flyhalf Elton Jantjies was released on bail after being detained in Johannesburg on Sunday. Photo: Archives

The 31-year-old understudy to Handre Pollard, who has played 42 times for the Springboks, allegedly damaged property on board the Emirates Airlines plane he had flown on from Dubai to Johannesburg.

Police spokesperson Colonel Athlenda Mathe confirmed that Jantjies was detained after arriving at OR Tambo International Airport and later released on R1 000 bail.

“The SAPS (South African Police Service) can confirm that the 31-year-old man who was arrested at the OR Tambo International Airport for malicious damage to property has been released on bail,” she said.

An airport official familiar with the arrest confirmed to AFP that the 31-year-old was Jantjies, a member of the squad that won the 2019 World Cup in Japan.

He is expected to appear at a magistrate’s court in Kempton Park on Monday, 16 May.

Jantjies made his professional debut in 2011 with the Johannesburg-based Lions and was loaned to French Top 14 club Pau in 2021 before joining Japanese outfit NTT Red Hurricanes this year.

Jantjies has played 42 Tests for the Springboks, scoring 312 points, thanks to two tries, 64 conversions, 57 penalties and one drop goals.

GRAPHIC: IFP calls for abusive policewoman to be arrested