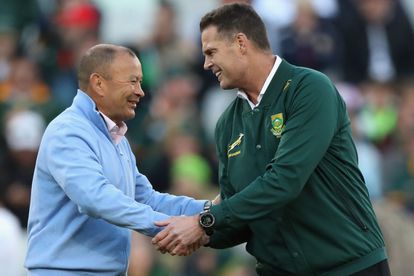 Last Thursday, World Rugby dramatically issued Rassie Erasmus with a ban on all match-day activities for two Tests as a result of recent social media posts, which were deemed to be critical of officials.

The ban will come to an end after this Saturday’s clash between South Africa and England in London, although it will be the second year in succession that Erasmus is forced to be absent from arriving at Twickenham. Last year, he was issued his first World Rugby ban on the eve of this fixture as well.

With the Springboks currently preparing to face England this Saturday, coach Jacques Nienaber announced the South African team lineup on Tuesday, but during the press conference, plenty of focus centred around “Rassie-gate”.

The English journalists in particular seemed to almost solely focus on asking questions about this subject, and at one point the Springboks media manager even had to step in to instruct Nienaber not to answer one question.

England coach Eddie Jones also predictably received a question on this subject, and in typical fashion, he responded in humorous fashion before changing tack to highlight the importance of respecting referees.

“He may come in a laundry box, mate… I’m sure he’ll get in somewhere,” Jones joked, before adding: “I’m not going down that track. The only thing I’d say is that we need to respect the referees. We need to look after referees as they’re an important part of our game. What’s happened has happened.”

The latest Rassie Erasmus ban will end this weekend

The director of rugby would have had few complaints about the officials this past Saturday though as South Africa thrashed Italy, while he took to Twitter after the match. “Thanks South Africa, appreciate your views and input! Lekka,” he commented as he referred back to another tweet of his from the previous weekend.