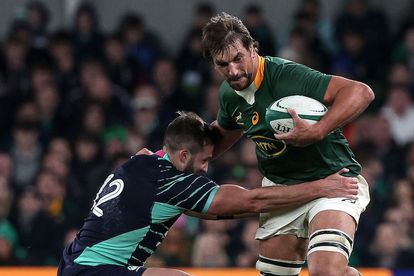 Eben Etzebeth on the charge. Photo by Morgan Treacy/INPHO/Shutterstock/BackpagePix

Eben Etzebeth on the charge. Photo by Morgan Treacy/INPHO/Shutterstock/BackpagePix

When the Springboks head into battle against England this Saturday, Etzebeth – who made his debut in June 2012 – will run out for his 110th international cap.

This weekend’s Test appearance will see Etzebeth move ahead of Jean de Villiers to become the fifth-most capped Springbok of all time.

Etzebeth has already enjoyed a remarkable career when it comes to maintaining consistent fitness and form, and by the end of next year, it would be fully expected that he will have surpassed both Smit and Mtawarira.

Also keep in mind that Etzebeth has only just turned 31 years old. He could quite feasibly play Test rugby for another five years if he is well managed and maintains his remarkable conditioning.

Considering that the Springboks generally play 12 to 13 Internationals in a normal Test year, it’s actually not beyond the realms of possibility that Etzebeth could not not only surpass Matfield, but also could become the first South Africa to play more than 150 Bok matches.

All in all, it’s an incredible prospect for the future, with Etzebeth also increasingly entrenching himself as quite possibly the greatest Springbok of all time.

Etzebeth will start his 104th Test on Saturday