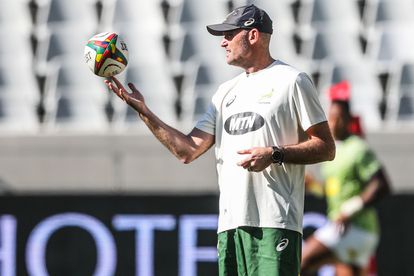 The date and time has been confirmed for the announcement of the Springbok team to play Wales in Cardiff on Saturday. Photo: SA Rugby website

The date and time has been confirmed for the announcement of the Springbok team to play Wales in Cardiff on Saturday. Photo: SA Rugby website

On Tuesday Springbok coach Jacques Nienaber named his 23-man squad to do battle with the British & Irish Lions in the series decider on Saturday.

After an impressive showing in the Springboks 24-9 win over the Lions last weekend, Nienaber has decided to revert to a more conventional 5/3 split on the bench, a split that may just have more to it than what meets the eye.

Lions beat the Springboks in every facet

The Springboks had no match for an unrelenting 80 minute performance from the Lions in the series’ first Test where the visitors stunned their hosts by taking them on in their own game. Additionally, the Lions had seemed to have the upper hand on the Boks with almost all facets and battles on the field during that game.

The Lions were frustrating the Springboks, coming out trumps in both the aerial and physical battle, which was perhaps perfectly depicted by the visitors try through a rolling maul, a try that remains their only one so far in this enthralling series.

Springboks atoned in the second Test

Test number two threatened to follow a similar direction as the first one, with the Springboks predictably coming out firing from the blocks, with some of that fire most likely fuelled by the off field events that transpired. However, the Lions seemed to once again be up to the task when faced with that challenge, forcing a lot of ill discipline from the Boks during those opening exchanges.

However, the picture began to change in the second half with the Springboks finally beginning to click, despite the enormous loss of Pieter Steph-du Toit which would’ve undoubtedly made an already mammoth task harder. They managed to penetrate the Lions defence twice through two tries from Sharks duo Makazole Mapimpi and Lukhanyo Am. But besides those two impressive tries, ultimately it was the type of fire power that Nienaber was able to call upon from the bench that may have proven the difference in the second Test for the Boks.

Having the luxury of bringing on the likes of Lood de Jager who was an absolute menace in the line out for both that of the Springboks or that of the Lions, Marco van Staden who quickly proved his acumen on the ground with a steal late in the game in the opposition half which eventually yielded points of consolidation for the Boks. The replacement front row was also introduced at a more appropriate time in the second Test unlike the first where an injury enforced it to happen prematurely.

Equally so for the first Test, it was perhaps the bench’s impact, or lack thereof that may have proven to be the difference between the Lions win and the Springboks being fired across the line. One of the replacements that would’ve been entrusted with making a positive impact for the Boks during the closing stages of that game would have been Elton Jantjies.

Jantjies failed to make the desired effect in his cameo

The Former Lions flyhalf instead made an error that resulted in a turnover ball deep within his own half, an error that only made things tougher for the Springboks to get up the field in time to attempt to win the match. In the end it was yet another cameo that only served to further vindicate the frustrations many Bok supporters have with regards to Jantjies’ temperament at international level.

His appearance on the bench in a conventional 5/3 split which had become not so conventional en-route the Rugby World Cup triumph could, in many ways had been interpreted as Jantjies’ final auditions to prove his Springbok acumen as a supporting cast to undisputed started Handre Pollard in that first Test.

READ | POSITION? YEP! APHELELE FASSI IS IN THE BEST POSITION TO PROVE HIS SPRINGBOK CREDENTIALS

But the fact that Jantjies has now spent the last two weeks watching the Springboks successfully return to a 6/2 split and then, when they revert to the 5/3 split he is replaced by veteran flyhalf Morne Steyn who was thought to have only been selected as cover for this Lions tour, may just point to a grim picture for his Springbok career.

With a certain Johan Goosen back in the country firing week in, week out at flyhalf for the Bulls, including out playing Jantjies when the Bulls beat SA ‘A’ , Jantjies seeming out of favour with the Springbok regime at the age of 31, the writing on his international career may just be on the wall, and this series may well be his final one in a Springbok jersey.

Elstadt also looks to be in the same boat

Another player who was sent on to the field in hope of making a match winning impact for the Springboks in that first match against the Lions would’ve been Rynhardt Elstadt. The 31-year old flank who is also comfortable at lock, was a surprise call up by then Springbok coach and now South African Director of Rugby (or even waterboy if you prefer) Rassie Erasmus for the 2019 Rugby Championships.

However, with the success rate of Erasmus’ other left field selections coupled with Elstadt’s form for his French Top 14 side Toulouse not too much noise was made when he was brought into the Springbok side. What perhaps stood out with regards to his selection was the reason given for it. Elstadt primarily played as an open side flanker in France with Erasmus quick to clarify his role.

Erasmus specified that he saw Elstadt more as a player that can disrupt the opposition ball on the ground, rather than your traditional fetcher. However, the Springboks lost a lot of their balls on the ground in the first Test against the Lions, yet Elstadt was dropped out of the squad altogether instead of being entrusted in that disruptor role, with Nienaber going to van Standen instead in the 6\2 split.

Perhaps more damning for Elstadt is the fact that, the Springboks have lacked at both the positions he plays and the attributes many would associate with him at various points of this series, yet at no point has he seemed to do enough to convince the coaching staff to trust him to perform any of the roles he was supposedly selected for.

He was given the chance to prove his credentials as an off the bench physical presence for the Springboks in the first Test and failed to make an impact, he was then overlooked for the 6/2 split despite being a hybrid between a lock and flank similarly to the injured RG Snyman.

The third and final Test, the decider is one that had the Springboks sweating even more. The loss of du Toit and Duane Vermeulen not recovering in time, further compounded the need for a physical presence either from the start or from the bench to go with the Springbok DNA that has worked for them since 2019. The big decision was whether to start Franco Mostert at blindside flank where he finished the previous game, to compensate for that physical presence or to keep de Jager on the bench to offer the same sort of impact as the second game.

Elstadt’s presence in the squad should not even have made that a dilemma at all, as he was supposed to allow the Springboks to keep their DNA. However, he hasn’t even made the bench and now the question is, if he can’t be trusted in the game and squad situation that he was picked for and makes sense the most, what could possibly be a justification for his selection in the future?

Is this the end of the road for the Springbok duo?

International rugby is usually seen as four-year cycle game. Teams are always working towards building for the next World Cup. The Springboks lost on year and will have only one more after this year so it is a race against time to assemble a squad that will be ready to defend their Web Ellis Trophy on the land they won their second title in 2007, France.

With Jantjies and Elstadt going to be 31 and 32 respectively by the end of this year and basically still being rendered surplus to requirements by the Springboks, it may well make more sense for the coaching staff to call time on their international careers either after this Lions series or the fast approaching Rugby Championships next week, with younger talents available for the long run.