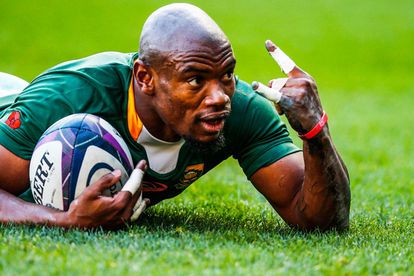 Makazole Mapimpi is back in the starting lineup for the Springboks. Photo: SA Rugby website

Makazole Mapimpi is back in the starting lineup for the Springboks. Photo: SA Rugby website

Springboks coach Jacques Nienaber has made eight changes and one positional switch to his matchday squad to face England at Twickenham on Saturday in the final Outgoing Tour clash, with a handful of South Africa ‘A’ players and Canan Moodie, who joined the team as reinforcements this week, getting a run.

Nienaber’s made six changes to his starting team with Jesse Kriel (centre), Makazole Mapimpi (wing), Evan Roos (No 8) and Eben Etzebeth (lock) back in the mix, while Damian de Allende moves from outside centre to inside centre where he partners up with Kriel, and Kurt-Lee Arendse will start at right wing after playing on the left in Genoa.

There were also four changes on the replacements bench, which will again feature the more traditional split of five forwards and three backs, with SA ‘A’ captain Thomas du Toit (prop), Marco van Staden (flanker), Jaden Hendrikse (scrumhalf) and Moodie being drafted in.

This follows the unavailability of Cheslin Kolbe (wing), Andre Esterhuizen (centre), Cobus Reinach (scrumhalf), Jasper Wiese (No 8) and Vincent Koch (prop), who all returned to their clubs.