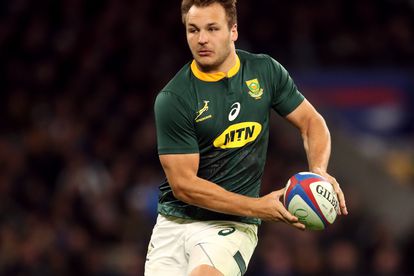 On Tuesday, Springboks coach Jacques Nienaber unveiled the team to face Italy, with Andre Esterhuizen and Damian de Allende interestingly named as a new-look midfield partnership, while Salmaan Moerat and Marvin Orie will pair up in the second row.

Jasper Wiese (No 8) also returns for the third Outgoing Tour match as Nienaber made four changes and two positional switches for the Test. Wiese was a late withdrawal from the match against France in Marseille last week and will take over from Kwagga Smith, who will start among the replacements.

The Springboks also handed starts to Moerat and Orie, with Lood de Jager having returned home with a shoulder injury, and Eben Etzebeth dropping to the bench.

Esterhuizen will earn a long-awaited start at inside centre, while Damian de Allende shifts to 13 in place of Jesse Kriel.

The other positional switch sees Franco Mostert move from lock to flanker in place of Pieter-Steph du Toit, who is awaiting a disciplinary hearing on Wednesday for a red card received against France for cleaning out a ruck dangerously.

No 8 Evan Roos, meanwhile, will feature on the replacements bench alongside forwards Etzebeth, Smith, and the front row of Steven Kitshoff, Vincent Koch (both props) and Malcolm Marx (hooker) in a split of six forwards and two backs on the bench.