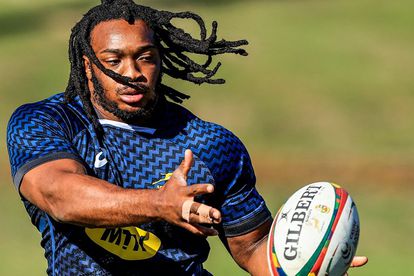 Springbok hooker Joseph Dweba will start Saturday’s Rugby Championship clash against New Zealand at Ellis Park following the withdrawal of Bongi Mbonambi as a precautionary measure after taking a knock his knee at training on Tuesday afternoon.

Dweba, who started both Tests he has played to date – against Wales in Bloemfontein in July and Argentina in Nelson Mandela Bay last year – will pack down alongside his former Cheetahs team-mate Ox Nche, with whom he progressed through SA Rugby’s national development pathway, which included featuring together for the Junior Springboks and SA Schools team.

The experienced Frans Malherbe, who earns his 50th Test cap this weekend, will pack down on the other side of the front row.

Springbok coach Jacques Nienaber said Mbonambi would go for scans to his knee, but with limited training time left before Saturday’s Test with one field session scheduled for Wednesday and the captains run on Friday, and an important three-match tour to Australia and Argentina ahead, as well as the year-end tour, the coaches opted to withdraw Mbonambi for this clash.

“We have an important Rugby Championship tour coming up and a year-end tour later this year, so we don’t want to take any risks with Bongi,” said Nienaber.

“Joseph has been working hard at training and he’s been waiting patiently for his chance, and we feel that it doesn’t get better than facing the All Blacks, who are one of the best teams in the world.

“We have big squad and a large part of the logic around that decision was to ensure that all the players are familiar with our structures and systems, and to expose them to Test rugby to build our squad depth with an eye on next year’s Rugby World Cup. So, this will be a fantastic opportunity for Joseph.”

Nienaber said Dweba’s strong combination with Nche also played a role in his leap straight into the starting lineup: “Joseph and Ox come a long way together. They’ve played close to 100 first-class games together, and they know each other well on and off the field having played together since school level at HTS Louis Botha.

“They progressed through the SA Rugby junior rugby ranks together before forming a strong combination at the Cheetahs in the Currie Cup and PRO14 competitions, and we believe their familiarity will give us the best chance in this match,” added Nienaber.

WATCH | MISSED THE HIDING? CATCH HIGHLIGHTS OF THE SPRINGBOKS’ WIN OVER THE ALL BLACKS

UPDATED SPRINGBOK TEAM TO FACE THE ALL BLACKS