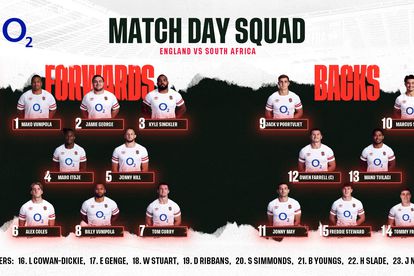 England have unveiled their team to face the Springboks on Saturday. Photo: @EnglandRugby/Twitter

England have unveiled their team to face the Springboks on Saturday. Photo: @EnglandRugby/Twitter

England will host the Springboks at Twickenham Stadium in the final Autumn Nations Series game for both teams on Saturday 26 November (7.30pm kick off SA time).

On Tuesday, England coach Eddie Jones unveiled the team to face the Springboks, with Manu Tuilagi set to make his 50th appearance for England at outside centre, having made his debut for England against Wales in August 2011. Owen Farrell will again captain the side at inside centre.

Marcus Smith is at flyhalf and Jack van Poortvliet remains at scrumhalf despite a horror performance against the All Blacks last weekend. Tommy Freeman comes in at right wing, Jonny May is at left wing and Freddie Steward is fullback.

ALSO READ | ETZEBETH SET FOR ANOTHER BIG MILESTONE ON SATURDAY!

“This is our last game of the autumn and our chance to continue building on the improvements we have made throughout the matches,” said Jones. “We have made steady progress from game-to-game, culminating in a pulsating draw against New Zealand.

“Now we have the chance to test ourselves against the might of the world champions. We’re going out there to light the crowd up. The support at Twickenham was outstanding last week and we want to work hard on the pitch to make sure we have another atmosphere like that again on Saturday.”

VIDEOS: BEST AND WORST RENDITIONS OF THE SOUTH AFRICAN ANTHEM