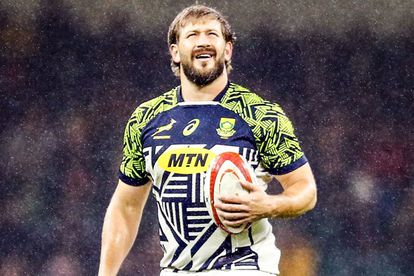 On Saturday, just minutes after the Stormers had set up an all-South African final in the URC against the Bulls, the Springbok coaches unveiled a world-class squad for the 2022 season. However, many were left shocked when they noticed the names of veteran World Cup winners Duane Vermeulen and Frans Steyn were missing.

It led some to speculate that perhaps the Boks were moving in other direction, but the fact of the matter is that both players are currently unavailable due to injury.

Steyn is currently undergoing rehabilitation for a hamstring injury he sustained while in Currie Cup action for the Cheetahs, while Vermeulen is soon set to undergo a procedure to treat a niggling knee injury.

“We’ve had a good conversation with Frans,” Bok coach Jacques Nienaber told the media on Tuesday. “He is a player we will probably pull into the squad at some point later this year.

“As part of our open discussion with him, we told him to focus on his rehabilitation, and to make sure he works towards getting back to 100% fitness. If we pick up an injury, then we’ll look to pull him in. He (Steyn) understands the plan and how we are thinking. The moment he is ready, we will consider him.

“Duane is set to have a procedure this week, and will probably do his rehab in South Africa, then go through his recovery process, and after that – once his club has provided clearance – then we can consider him once he is fit as well.”

In the absence of Vermeulen, the Boks could continue with Kwagga Smith at No 8, while exciting youngsters such as Elrigh Louw and Evan Roos are also options in addition to Jasper Wiese. Of course, Marcell Coetzee – who received somewhat of a surprise call-up – could also cover No 8, although he is also an option at blindside or openside flank.

Meanwhile, Damian Willemse is likely to fulfil a key role as the Boks’ utility back on the bench while Steyn continues to recover from injury.

A squad of 17 players gathered in Pretoria for the opening week of the team’s preparation camp last week, featuring a number of cSharks and Japanese-based players.

With the Bulls and Stormers advancing to the final of the United Rugby Championship next week, Nienaber called up Roos, Fourie,.Warrick Gelant (fullback) who makes a return to the national set-up for the first time since the 2019 Rugby World Cup, Moerat and Marvin Orie (both locks), Steven Kitshoff, Frans Malherbe (both props), Herschel Jantjies (scrumhalf) and Damian Willemse (utility back) from the Cape-based franchise, while Coetzee, Louw, Nortje and Arendse join from the Vodacom Bulls.

Despite the absence of Vermeulen and Steyn, the Boks named a formidable squad

The remaining players are set to join the squad following their club and franchise commitments.

Johan Goosen (flyhalf) – who joined Cobus Reinach in the opening week – will also remain with the squad until of the conclusion of the camp to continue his rehabilitation, with Reinach set to remain with the group.

“Building squad depth is one of the key areas for us, and it is great to see the number of young players who have put up their hands this season, and we are delighted to invite them to the national squad environment,” said Nienaber.

“It is also good to welcome back some of the experienced players who have been part of our structures for a few years now, and I’m confident they will slot back into set-up with ease.

“We obviously have to wait a little longer for some players to be released from their club commitments, but we are pleased to be able to announce the squad with exactly three weeks to go before our opening Test against Wales.”

The Boks will kick off their 2022 season with three Tests against Wales in the Incoming Series on 2, 9 and 16 July respectively before launching into the Rugby Championship, where they will line up against the All Blacks in back-to-back home Tests, which will be followed by a tour to Australia and Argentina. They will then return home for their final Test against the Pumas in Durban in September.