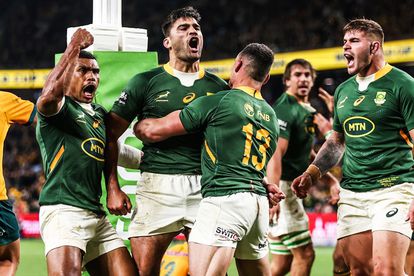 Springboks coach Nienaber will name his side to face Eddie Jones’ England on Tuesday, 22 November at 14:00 (SA time), with several changes set to be made after European and UK-based players left the team this past weekend.

With this Saturday’s clash falling outside of the international window, Andre Esterhuizen is one of the players who has returned to his English club, which could make things more tricky for the Springboks after Damian de Allende was said to have pulled up with a possible injury.

According to Netwerk24, De Allende returned to the team hotel by himself in clear discomfort on Monday, while his teammates continued with the training session. The Springboks will be hoping this was just a precautionary measure considering they have a policy that states players must be available for Monday training in order to be available for selection at the weekend.

If De Allende is unavailable, then Damian Willemse is likely to shift to inside centre, with Manie Libbok coming in to start his first Test at flyhalf.

The Boks made the journey from Genoa to London on Sunday and began their on-field preparations on Monday. The clash against England this Saturday will kick off at 19:30 (SA time).