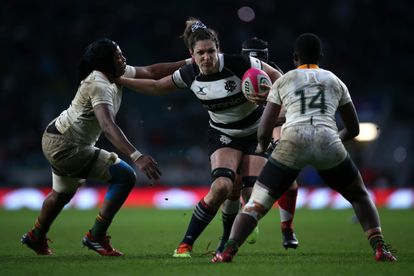 LONDON, ENGLAND – NOVEMBER 27: Lenaig Corson of Barbarians runs with the ball during the Killik Cup match between Barbarians Women and Springbok Women’s XV at Twickenham Stadium on November 27, 2021 in London, England. (Photo by Steve Bardens/Getty Images for Barbarians)

LONDON, ENGLAND – NOVEMBER 27: Lenaig Corson of Barbarians runs with the ball during the Killik Cup match between Barbarians Women and Springbok Women’s XV at Twickenham Stadium on November 27, 2021 in London, England. (Photo by Steve Bardens/Getty Images for Barbarians)

The score against the Barbarians on Saturday reflected some realities of where the Springbok Women squad are says head coach Stanley Raubenheimer.

The coach feels that the match was a barometer for an ever-improving side, letting them know just how far they need to go.

Raubenheimer reflected on the 60-5 result at Twickenham on Saturday, but also took a wider look of the squad’s growth on the November tour, where they also played Tests against France and Wales and a friendly match against England’s Under-20 team.

“There were some areas of concern from yesterday’s match – the slow start did not help us at all, especially our inability to secure first phase possession,” said Raubenheimer.

“That was disappointing. We were a bit rushed when our game was moved forward by a couple of hours due to the men’s game being cancelled and we hardly had time to warm up before the kick-off, but that is not an excuse for us not winning first phase.

“We did play much better in the second half though and looked much more settled.”

No substitute for experience

Raubenheimer pointed to the fact that the Baabaas had massive experience in their ranks and that their players adapted to the change much better, hence their improved start.

“They had two players who played more than 120 Test matches and only two who did not play more than 20 Tests,” he said.

“On the contrary, we have only two players who have played 20 or more Tests and the rest are in single digits. That experience showed in the early stages of the match as their composure were much better than ours.”

Raubenheimer said the slow start compounded the early pressure by the Baabaas: “We looked better as the game progressed, but some players did not respond the way we expected them to in those early stages of the match.

“The consistency of performance will be a vital aspect we need to work on towards the World Cup, we need to know what to expect from our players.”

Raubenheimer said he and his coaching staff feel that the squad’s growth was a positive aspect of the tour.

“We certainly made progress at many levels,” he said.

“We needed to learn to play at the high intensity of the French as we will meet them in the World Cup next year, and we showed real grit against Wales after a slow first half.

“That happened against the Baabaas, but we managed to deliver a much more cohesive and spirited effort in the second half at Twickenham.”

Raubenheimer said the players will have time off upon their return to South Africa on Monday and will re-assemble in January.

“We will need to make sure we can maintain the momentum built up on this tour,” he said.

“The game time the players got was worth gold to us as they managed to build experience of competing at this level. It will be important for us to maintain an environment where the squad can continue to improve and not fall back in old habits.”

Raubenheimer confirmed that Catha Jacobs will not return to South Africa with the squad, but she will join London Irish for the next four months. Jacobs could become the second squad member to play in the Allianz Premier 15s after Zintle Mpupha joined Exeter Chiefs last month.