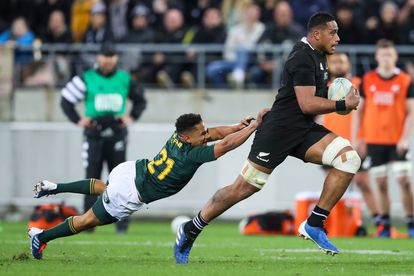 NZ Rugby has confirmed an investigation has been launched into allegations that All Black Shannon Frizell was involved in an assault on a woman.

NZ Rugby has confirmed an investigation has been launched into allegations that All Black Shannon Frizell was involved in an assault on a woman.

SA Rugby announced a two-Test warm-up schedule for the Springboks against Georgia, ahead of the British & Irish Lions series, but those were not the only opponents they spoke to, with the New Zealand All Blacks also in the picture.

The South African rugby mother body made a welcome announcement on Monday, confirming that the Springboks will get an opportunity to rid themselves of the cobwebs, that come with a one and half year Test rugby hiatus. The world champions are set to host Georgia just before they get their British & Irish Lions series underway.

According to a report from The Daily Maverick, the Eastern European side was not the only side Rassie Erasmus and his regime were lining up to test the wits of new coach Jacques Nienaber’s Springbok side. It is believed that former world champions New Zealand were also approached with regards to a once-off friendly encounter. The report goes further to claim that, the New Zealand Rugby top brass had actually been willing participants in the discussions.

The game was reportedly set to take place in Dubai, with New Zealand giving signs of optimism up until the very last minute when they pulled out due to Covid-19 precautions. Dubai was recently added amongst the “red flag” countries with regards to the virus.

The All Blacks themselves are scheduled for a two-Test series with Pacific Islanders Fiji which kicks off on July 10. Had they agreed to the Springboks fixture, they would’ve had to quarantine for a period of 14 days upon their return to New Zealand shores. That would’ve ultimately made it impossible to honour their agreement for that series, as the quarantine dates would overlap with that of the proposed series

The Springboks will now have their sights set and fully focused on their own two-Test series against Georgia, as the preparations for what promises to be a mouthwatering British & Irish Lions series will soon be in full swing.

‘Isibaya’ actor Bongani Gumede graduates with a diploma from Wits

‘In danger’: UN calls for urgent global fight against HIV

Wait, What? Advocate Teffo accuses Judge Maumela of bewitching him