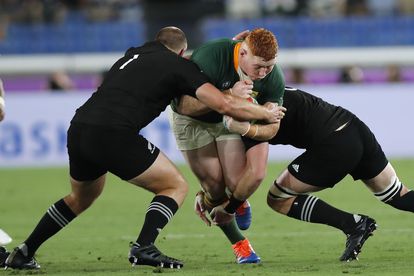 Coping with the need to adjust to referees’ scrummaging interpretations on the hoof was the lesson the All Blacks front-row took from last Saturday’s Rugby Championship Test against the Springboks. EPA-EFE/KIMIMASA MAYAMA EDITORIAL USE ONLY/ NO COMMERCIAL SALES / NOT USED IN ASSOCATION WITH ANY COMMERCIAL ENTITY

Coping with the need to adjust to referees’ scrummaging interpretations on the hoof was the lesson the All Blacks front-row took from last Saturday’s Rugby Championship Test against the Springboks. EPA-EFE/KIMIMASA MAYAMA EDITORIAL USE ONLY/ NO COMMERCIAL SALES / NOT USED IN ASSOCATION WITH ANY COMMERCIAL ENTITY

Coping with the need to adjust to referees’ scrummaging interpretations on the fly was the lesson the All Blacks front-row took from last Saturday’s Rugby Championship Test against the Springboks.

According to the All Blacks website, loosehead prop Joe Moody said the 19-17 win had been ‘an average night at the office’.

A post-Test review revealed both how much needed to be worked on and how much room there was for the All Blacks to improve, especially in simple things.

“Hopefully, going into this week, we nail a few of those and have a better outcome than last week,” he said.

Moody, who has 52 Test caps to his name, felt the All Blacks were not getting the rub of the green in the scrum rulings.

“But that happens, and you just have to adjust. And whoever adjusts to the way the scrums are being called on the night, is the one who is going to come out on top. We just need to be good in that space and adjusting to what is being called,” he said.

Moody, 33, went into greater depth regarding how the Springboks like to ‘bend’ the law book at scrum-time.

“We know their tighthead always likes to angle in, attack our hookers, and that sort of carry-on.

“There’s a few different things with angles, even the way they set up on the bind, put a bit of lean-through on the bind with their No 8s firing early to trigger their scrum. There’re a few technicalities that are different, unless you really love scrummaging it’s probably going to bore you,” he said.

It’s not something Moody shies away from.

“It’s always good scrummaging against the South Africans. They’re big, powerful men and the different aspects of the technicalities that they bring is also a challenge as well with the pure power and size of them. It’s always a good challenge.”

READ | OFFICIAL STATS: CHECK HOW TIMES THE SPRINGBOKS KICKED AGAINST THE ALL BLACKS!

But there was a frustration with the stop-start nature of the game, usually the result of injuries of convenience.

“It almost felt like I was hardly getting a sweat on. Literally just about every stoppage someone was going down and having a smoko, so it would be nice if something could be sorted in that side of things with the officiating this weekend,” he said.

But even without the referee’s help, the All Blacks know they have improvements aplenty they can make in their game.

“If you saw all the clips we got shown where we could have made better decisions and done things better, you would say there is a lot of room for improvement.

“For the most part, we were getting in the right places, and it was about making better decisions.

“It’s about guys standing up and actually calling for the ball when they’re in the right spot. We let a lot of things slip, it’s just being better in our roles,” he said.

Kick-off is the second Rugby Championship Test between the All Blacks and Springboks in Gold Coast on Saturday, 2 October is at 12:05 SA time.