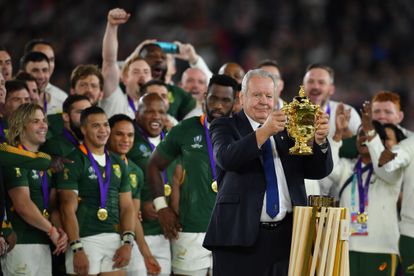 Thanks to inspired play in this year’s Six Nations, hosts France have been installed as joint favourites for next year’s Rugby World Cup. Photo: Getty Images

Thanks to inspired play in this year’s Six Nations, hosts France have been installed as joint favourites for next year’s Rugby World Cup. Photo: Getty Images

Thanks to some inspired play in this year’s Six Nations, Rugby World Cup 2023 hosts France have been installed as joint favourites for next year’s tournament.

READ | FRANCE CAN OVERTAKE ALL BLACKS IN WORLD RANKINGS: HERE’S HOW

As reported by The South African website, France have the chance to claim their first Six Nations and Grand Slam title since 2010 when they host England on Saturday, 19 March (22:00 SA time).

A win for the French would also see them overtake the All Blacks and move into second place in the World Rugby rankings.

Former All Blacks hooker Sean Fitzpatrick believes France are strong contenders to dethrone the Springboks as world champions when they host the 2023 World Cup.

“France look fit, young and well organised. They have a lot going for them,” Fitzpatrick said.

“They are the form team in world rugby, without question. The Top 14 is a good competition, and the players who have been performing for their clubs have rolled that over into international rugby. There are some really good systems in place.

“Their coach Fabien Galthie has been doing a great job, while (assistant) Shaun Edwards has done wonders for their defence. Traditionally they’ve relied a lot on natural flair, but now they also have big forwards who are carrying the ball with such impact.

“Then there’s Antoine Dupont, who is the best scrumhalf in world rugby without question, while (flyhalf) Romain Ntamack is just getting better and better. The rest of their backline is pretty good too.

“So yes, if they can keep it together and handle the pressure of being favourites in their home country, then they will have a great chance!”

Leading South African bookmakers Hollywoodbets are in agreement with Fitzpatrick and have France and New Zealand as 5/2 joint favourites to lift the Webb Ellis Cup after the final at the Stade de France on 28 October 2023.

England are next best at 9/2 followed by the Springboks at 5/1.

Ireland, despite their poor World Cup record, appear to offer excellent value at 10/1, with Australia (12/1) and Wales (18/1) the only other realistic winners.

Newspaper front pages from around the world, 07 February 2023

ANC has favoured loyalty over competence