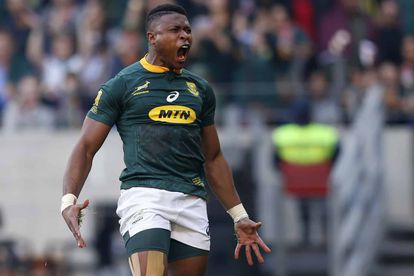 At the beginning of this year, Bok wing Aphiwe Dyantyi – who is currently serving a four-year suspension related to banned substances – said he is focused on getting back to the game.

In 2019, and on the eve of the Rugby World Cup, Dyantyi was banned from all forms of the game after his mandatory B sample came back testing positive for three banned substances following a national training camp.

Notably, there is now less than 11 months to go until Dyantyi could be available to play again, with his possible return set to come just before his 29th birthday.

Several months ago, Sunday newspaper Rapport reported Dyantyi had moved to Durban where he is working and training in hopes of making a successful transition back to the game once his suspension is lifted.

Apparently he can start training with a team six months before his ban ends, and some talk suggested his move to Durban could open the door for an opportunity at the Sharks, where S’bu Nkosi has headed away from Kings Park to join the Bulls.

A group of supportive people are said to have been assisting Dyantyi after the hardship he endured following the shock suspension, and it’s now hoped that he could make a successful comeback to professional rugby.

In another article on IOL Sport back in May, written by respected Durban-based journalist Mike Greenaway, it was also stated that the signs increasingly seem to indicate that the Sharks may consider extending a lifeline to Dyantyi in the near future.

The 28-year-old is entering his final year away from rugby, and he took to social media not that long ago to suggest he will aim to get back on the field.

“This year marks three years out of the game,” Dyantyi wrote in February. “A very challenging three years coupled with tears, rebuilding, love and laughter.

Few will forget what an impact Dyantyi made during the start of his Springboks career, which was prematurely brought to a halt.