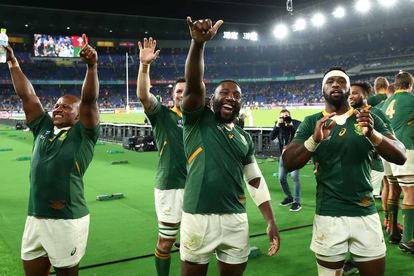 On this day, 27 October 2019, the Springboks took a giant leap towards being crowned world champions, beating Wales in the second 2019 Rugby World Cup semifinal in Yokohama.

The men in green and gold had progressed through the Pool stage in second place behind New Zealand and dispatched hosts, Japan in the quarterfinals. Their semifinal opponents finished top of their Pool before registering a tight victory over France in the last eight.

On this day: Springboks edge Wales in tight encounter

The much-anticipated encounter came a day after a titanic battle between then-reigning champions, the All Blacks and 2003 winners, England.

It was the English who booked their spot in the final, their first since losing to the Boks in Paris back in 2007.

Ahead of the day, South Africa had suffered a big bowl in terms of playing personnel, with the explosive Cheslin Kolbe ruled out with an ankle injury.

The more than capable S’bu Nkosi, however, stepped up in what was the only change to the team that beat Japan a week prior.

The Welsh, on the other hand, made two changes, with the experienced Leigh Halfpenny replacing Liam Williams. At the same time, another veteran in Jonathan Davies came in for Owen Watkin after recovering from an injury which kept him out of the quarterfinal vs France.

The match was far from a spectacle, with what was almost a battle of the boot interrupted by a try from either side, as Damian de Allende and Josh Adams dotted down for South Africa and Wales, respectively.

Speaking after the game, Springbok coach Rassie Erasmus admitted that the contest was lacking in fireworks.

“We know there are areas that we have to improve, but we have given ourselves a chance against England. It is two-all in our last four meetings with them but we know they have improved since then by the way they dismantled New Zealand.”

His opposite number Warren Gatland, who was at the latter end of a 12-year spell at the helm, was relegated to contesting the Bronze final in his last game as Wales coach.

“It would have been a dream to play England in the final in my last game as Wales coach, but it was not to be,” Gatland said. “Friday is our last game together and we want to enjoy that. We’ve had a few injuries but there are no excuses as South Africa deserved to win the game.”